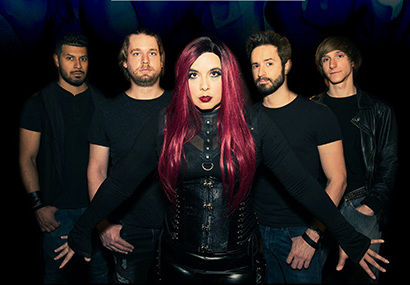 EDGE OF DESTINY: new single out

Magic happens when kindred spirits come together in a cross pollination of music styles. There is the familiar theme of the common and then the edge of difference that draws it all together to create what can only be known as Edge of Destiny.

The hard driving metal drumming of Chase Bailey, coupled with the percussive bass stylings of Michael Cormeau lay the perfect foundation for this bridge between modern, active, alternative, hard and progressive rock.

The progressive rhythms and layerings of guitarists Kris Copley and Ulisses Moran shape and color the sound for singer Kraevin Caedo’s powerful vocal stylings to shine through on hook-laden melodies.

Although Edge of Destiny is still emerging from its infancy as a band, Kraevin is a long standing veteran in the music industry.

Edge of Destiny stands to be joining the ranks of some of today’s top national acts in no time at all, having toured with Diamante, The Crowned and Dawn of Flames and have opened for Alice Cooper’s Nita Strauss, Saliva, Ellefson, Red, Kore Rozzik, Brand of Julez, Cold, Armed for Apocalypse and most recently Tantric and Smile Empty Soul.

Edge of Destiny has also played with other popular acts such as A Killer’s Confession, Magg Dylan, and many more.

Though the COVID19 “crisis” has been devastating to many artists around the world, Edge of Destiny has thrived releasing live streams and engaging their audience around the world.

The band returned from Hollywood, California in January 2021 where they record 3 more songs to be part of an album to be released later this year produced by Keith Armstrong and Hugo Ferreira (Tantric).

The singles will be strategically released over the next few months with music videos while tour dates are pending to be booked for 2021.

Be sure to catch them live for what will certainly be an engaging powerhouse show.