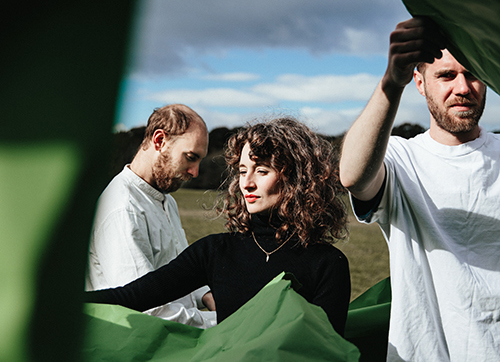 As anticipation builds for the Bristol-based band’s sophomore album, “Sacred” is testament to the trio’s capabilities as they weave infectious melodies with lush synths to leave listeners in a wash of utter captivation. What starts as a soothing introduction explodes into life with an irresistible chorus and a strutting bassline, as Katy Sargent’s invitingly delicate vocals take the lead amidst a tight, rhythmic build-up that gives the track an understated feel with one foot still on the dancefloor.

As the band makes another nod to the A/B-side releases of yesteryear, “Sacred” arrives alongside B-side “Endeavor,” finding the trio in a reflective mood. Minimalist and synth-driven, the track highlights the expansive nature of their sound and talents, suggestive of a group gearing up for their long-deserved mainstream breakthrough.

Speaking about the new release the band explain: “Exploring how our behaviour is led by chemical biology, Sacred is a dynamic, uplifting track. It is a celebration of life’s natural rhythms of highs and lows.“

Ahead of the band’s UK tour kicking off on the October 9, Elder Island will be connecting with fans through a new monthly tournament series playing their addictive new game, Pairly Educational. Part play, part interview, the game will be streamed across the trio’s social media for fans to watch and engage, with the winning side delving into their opponent’s world, asking questions on music, art, inspiration, and creative hobbies. Stay tuned for the first guest announcement on socials.

Pairly Educational, a play on previous single “Purely Educational,” was produced by creative digital agency F That to test fans’ memory skills over three levels which get progressively harder. Immersing players into the nostalgic world of their forthcoming album with symbols taken from Swimming Static’s artwork, players race to match cards to win a coveted spot on the game’s leaderboard . With Spotify and Apple Music integration to drive streams as users play, the game also contains hidden content only unlocked by completing all three rounds. You can play the game here.