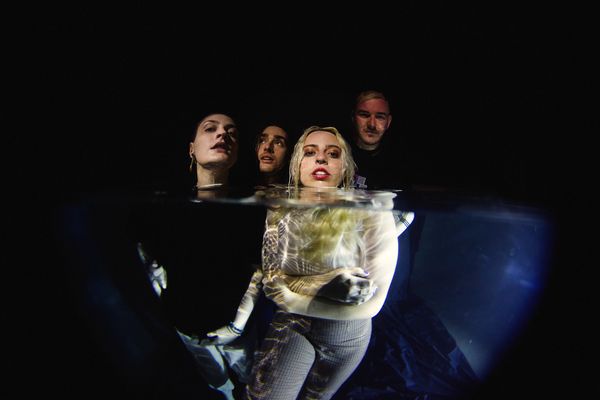 Currently On Australia Headline Tour
U.S. Bottlerock Festival In May

With its Australian tour underway and its debut album Now And Then in the wings waiting to be unleashed, Eliza & The Delusionals returns today sharing the lead single from the studio album: the addictive “Bed Song.”

Released as a follow up to February’s “Give You Everything” and “Halloween” at the top of the month, “Bed Song” is another masterclass in how songwriters Eliza Klatt and Kurt Skuse balance emotionally driven lyricism with fresh and dynamic songwriting arrangements.

As an indication of what the wider Now And Then album is like, “Bed Song” is a prime example of Eliza & The Delusionals in its natural element – harnessing rich indie and alt-rock influences in producing something completely its own.

A song about relationships and the different ways we navigate them, “Bed Song” was recorded between Brisbane’s Airlock Studios and the home studio Kurt and Eliza built during the initial waves of the pandemic as well as the studio of acclaimed producer Konstantin Kersting (Tones And I, Mallrat, The Jungle Giants).

“‘Bed Song’ was an idea that started off so differently and I’m glad we came back to it and worked on changing it because it quickly became one of my favorite songs on the record. This song is really about Kurt and myself finding similarities in our past relationships and bringing those ideas together in a way where we could understand each other’s perspectives.” – Eliza Klatt, Eliza & The Delusionals

2022 has proven to be a busy return to live touring and forward planning for Eliza & The Delusionals. Currently working its way around the East Coast of Australia on its headline Give You Everything Tour after playing some incredible rooms earlier in the year with The VANNS, the band is thriving as it has hurtle confidently towards album release and its return to North America where the band will kick off its international campaign with an appearance at the Napa Valley’s Bottlerock Festival alongside the likes of Metallica, CHVRCHES, Twenty One Pilots, BANKS and more.

Its journey to this point has been one of many successes in the face of constant pauses to scheduled tour and relocation plans.

Since the release of the 2020 EP A State Of Living In A Objective Reality, Eliza & The Delusionals has been consistently establishing itself as an Australian act with legacy potential dropping a string of singles throughout 2021 that bolstered its reputation as a vibrant powerhouse.

The release of singles “You,” Save Me” and “Nothing Yet” elevated Eliza & The Delusionals’ presence in Australia and abroad (“Save Me” accruing over 750k combined streams worldwide alone, as well as 30+ editorial playlist spots and the cover of Front Lefton Spotify).

The band currently enjoys over 92k monthly listeners on Spotify, with recent release “Give You Everything” racking up over 109k worldwide streams since its release and the official music video accruing over 15.8k views to date.

Now, with the release of “Bed Song” coming just ahead of Now And Then, Eliza & The Delusionals is giving fans one final taste of what’s going to be the most defining effort to date.