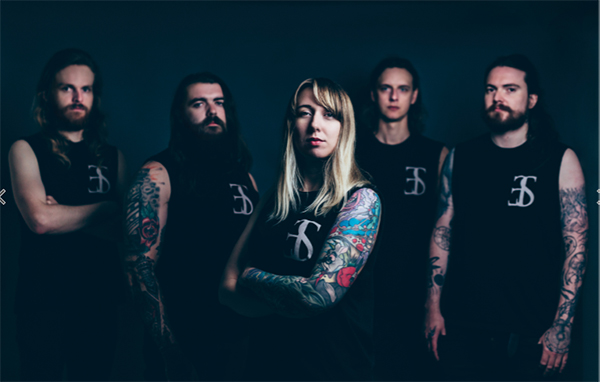 Employed To Serve – new single out

Employed To Serve has released the music video for its latest single “Mark Of The Grave.” Check it out here.

“Mark Of The Grave” is the second single from the forthcoming album, Conquering, and demonstrates the band at its most metal yet. The video is a trip, to say the least…

“With this video we just wanted to have fun“, saysfrontwoman Justine Jones. “After months of being cooped up inside, we wanted to focus on a project that was more light-hearted. We shot the music video at Miracle Theatre in Cornwall with director Ryan Mackfall. The theatre was kind enough to give us free reign of their studio and stage costumes.

Everything was shot in front of a green screen to maximize the opportunity to have fun with the edit. We then sent over a few notes to VFX artist Nadav Rotem and assistant Jake Potter, as soon as they came back with Sammy doing a solo on a flying, flaming skull, I knew it was going to be my favorite video — it’s wild and we love it.”

“Conquering” releases on September 17 and is Employed To Serve’s second full-length album on Spinefarm.

Drawing influence from the music of their youth and a new perspective on how to nurture the positive aspects of humanity and individual growth, “Conquering” is a celebration and acknowledgement of triumph in the face of a world that can be relentlessly adversarial. The band began recording the album in the “unforgiving winter” of 2020; produced and mixed by Lewis Johns at The Ranch, Southampton, mastered by Grant Berry at Fader Mastering, Employed To Serve took the time thrown at them by a world stopped still to write their most visceral material to date.

Pre-orders are live, with an instant download of singles, “Exist” and “Mark Of The Grave,” plus special bundle options.

CONQUERING TRACK LISTING:
“Universal Chokehold”
“Exist“
“Twist The Blade”
“Sun Up To Sun Down”
“The Mistake”
“We Don’t Need You”
“Set In Stone”
“Mark Of The Grave”
“World Ender”
“Conquering”
“Stand Alone”

ABOUT EMPLOYED TO SERVE:

Employed to Serve’s origins are essentially humble, with the core duo of Justine Jones (vocals) and Sammy Urwin (guitar/vocals) initially starting the band as a two-piece grindcore project backed by a drum machine. Early experiences on the UK festival scene expanded their horizons and perceptions of what weightier music could be.

Seeing heavy-hitters such as Converge, Meshuggah, and Glassjaw alongside smaller but no less important acts like Rolo Tomassi, Veils, and The Chariot inspired the duo to develop their vision. 2014’s Change Nothing Regret Everything EP operated as a stepping stone into full band territory, before 2015’s critically acclaimed debut album, Greyer Than You Remember, became their calling card, followed up two years later by The Warmth of a Dying Sun, then their 2019 Spinefarm debut Eternal Forward Motion.

Employed to Serve has already proved itself as a searingly intense and honest live experience, sharing bills with the cream of the crop of modern heavy music, including Code Orange, Bury Tomorrow, Stick To Your Guns, Loathe, Counterparts, and Underoath.

The band has also decimated stages at some of the UK and Europe’s leading music festivals, the likes of Download, Glastonbury, Graspop, and Hellfest. And the accolades are unstoppable; from the Kerrang! Album of the Year win back in 2017, achieving the assumed impossible with a KKKKKK (yes, that is 6 K’s!) live review, landing in Metal Hammer’s reader and staff Top 10 Album polls, and a 2020 sold-out Underworld performance, to a plethora of cover features across Music Week, Metro Weekend, Upset, and Kerrang!, Employed to Serve is unflinching at the forefront of metal innovation.