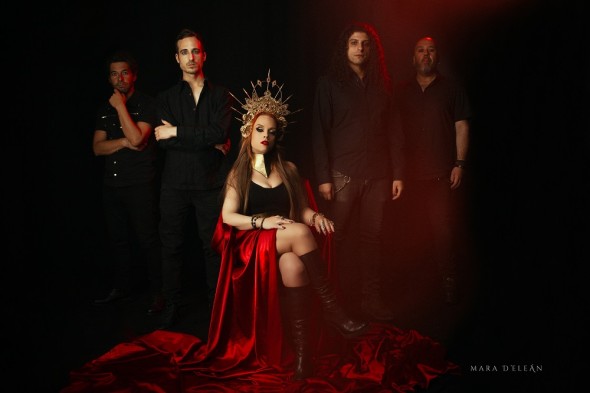 Portuguese melodic metal band Enchantya is set to release its third studio album, “Cerberus”, on April 28th 2023 via Inverse Records. The first single Existence is released today and video of the track is available here: https://youtu.be/juMKDAFlBy8

“Enchantya have worked on “Cerberus” before and throughout the pandemic, and its concept became clearer as the world kept changing around us. There was a need for strength and guarding ourselves and our loved ones, and at the same time an urgency for balance and calm in the midst of all the chaos.

Our Cerberus is a metaphorical guardian whose 3 heads separate the energies that reign over all Existence : Karma (actions and consequences), Prana (the eternal energy flowing and uniting us all and the Universe itself) and Anima (the individual spark in each soul). Only through mastery of these three energies can we overcome and achieve enlightenment. This is a beastly task and the main challenge for us all. We are very proud of this album and hope you can connect with us through its music! We can’t wait to share Cerberus with you all!”

BIOGRAPHY:
Enchantya was born in 2004 when vocalist Rute Fevereiro took a break from her classic band Black Widows and started exploring music for a new project. In 2005, the band recorded its first EP, “Moonlighting the Dreamer“, out in 2006. Having witnessed a great reception, the band started to work on the first album, releasing ‘Dark Rising’ through Massacre Records in 2012 to very positive reviews.

After some time touring and promoting the album,the band began composing. However, artistic and creative differences about the new music’s direction and sound would lead to the departure of members and the band split up.

Rute was alone with her project again and having to start all over. Fortunately, this did not stop Rute’s motivation and a few months later, by March of 2016, she had chosen a whole new team of talented musicians to take Enchantya through the next step. After a year of rehearsing with amazing creative chemistry, the band created “On Light and Wrath” , Enchantya’s second album.

Like in the debut album, the band booked a few months of studio recordings in 2018 with Fernando Matias at the Pentagon Audio Manufacturers, to bring the new album to life with eleven tracks, entitled “On Light and Wrath” , also taking one step further by adding violin, a whole choir of singers and the guest appearance of the vocalist from D E S I R E , Nuno Caldas, creating a very refreshed and even more epic sound for the band. Finnish label Inverse Records released Enchantya’s album in 2019.

In the middle of the second album’s promo tour, the pandemic hit and the band spent the following two years composing the new opus in the midst of all the chaos. It is now time to release “CERBERUS” , the result of the songwriting through the world’s conflicted times, and also Enchantya’s most ambitious album to date, an ode to how we can all rise from the ashes again and again. With the first single coming out in January, and two more in February and March, the album will finally see the light of day on April 28th, marking a 2023 with Enchantya returning in full form.

All songs composed by Enchantya
Lyrics by Rute Fevereiro, except for Karma, Prana and Anima written by Pedro Antunes