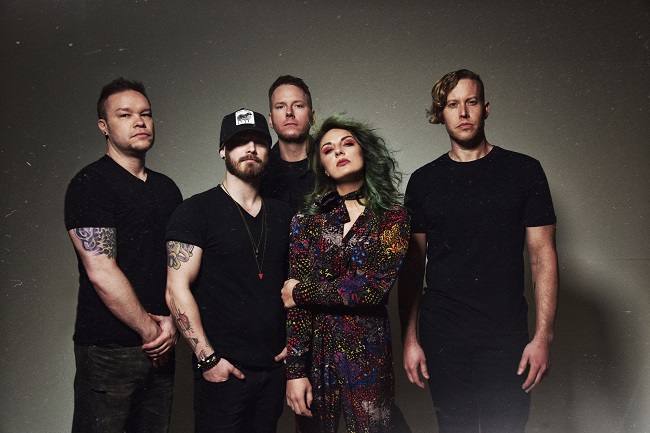 Currently on Tour with Skillet; Set for Dates with Theory Of A Deadman Later This Year in North America
GET TICKETS

Lead singer Eva Marie’s voice shines on “Unstoppable,” a passion-filled track about an untouchable love with lyrics like: Gonna light em on fire/ Prove em all wrong/ Bonnie and Clyde all night long/ Gonna be savage this is our song/ Gonna be untouchable unstoppable.” It follows three previously released songs from the album – “Blow (Featuring Spencer Charnas of Ice Nine Kills)”,“Comatose (Featuring Jonathan Dörr of Ego Kill Talent)”,and “Heroin(e)”– which give a dynamic preview of the forthcoming project, spanning from anthemic and aggressive to heartbreakingly vulnerable, in both sound and lyrics.

“Unstoppable” is available across streaming platforms, along with a new lyric video, HERE.

Reflecting on the band’s latest offering, lead singer Eva Marie said, “Unstoppable is a very different direction for us as a band, and I love its energy. It was the perfect track for a great love story – my parents to be specific. They were a 1980s burnout fairytale, full of fiery passion and determination. That kind of heart is exactly what we need as a brand new band in a weird world.”

The band is currently on the road, wrapping up their dates on Skillet’s North American tour this fall. Immediately following, they’re set to join Theory Of A Deadman on the road.  For more information and to purchase tickets, visit: https://www.evaunderfire.com/. See below for a full list of dates.

Released earlier this summer, the band’s song “Blow”featuring Spencer Charnas of Ice Nine Kills, is featured prominently on the soundtrack of the critically acclaimed horror film THE RETALIATORS, a Better Noise FIlms production, currently making its rounds at key film festivals across the globe. In August, the film had its WORLD PREMIERE at Arrow Video FrightFestin London. Last month, it’s North American premiere took place at the iconic TCL CHinese Theatre in Los Angeles as the OPENING NIGHT film for ScreamFest.

The film also took home an award for best make-up at ScreamFest and is currently rated 100% on Rotten Tomatoes. Eva Marie and Charnas both appear in the film, alongside some of the biggest names in rock: Mötley Crüe’s Tommy Lee, Five Finger Death Punch, Jacoby Shaddix of Papa Roach, All Good Things, Cory Marks. Mötley Crüe’s Nikki Sixx co-wrote and recorded the title song of the film.


###
ABOUT EVA UNDER FIRE
If you think rock n’ roll fairy tales are a thing of the past, you haven’t met Eva Under Fire. These Detroit rock upstarts got their start five years ago and instantly began cutting their teeth in the underground rock scene, building an enthusiastic fan base the old-fashioned way. However the band’s trajectory shifted toward the stratosphere when they sent an unsolicited demo to Better Noise Music, who recognized the band’s hybrid of rock, metal, pop and classic rock as something wholly unique.

That said, it took a lot of hard work for them to get to this point. The group’s roots go back to 2015 when Eva, guitarists Chris Slapnik and Rob Lyberg, bassist Ed Joseph and drummer Corey Newsom, decided to get together and write music that represented their diverse set of influences. The chemistry clicked and after releasing a well received full-length and two EPs, the band signed to Better Noise and spent the past two years working on their next album,their most ambitious and fully realized release to date.