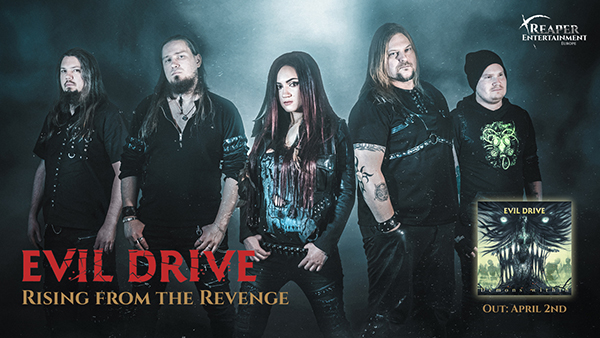 Finnish melodic metal band EVIL DRIVE strikes back again! On their 3rd upcoming album they present themselves more powerful and with major musical and technical improvements. The much awaited third album „Demons Within” will be launched and distributed worldwide on the 2nd of April 2021 by Reaper Entertainment Europe.

Today, the band presents the second album trailer on YouTube.
Check it our here:

The first part can be seen here:

The music video for the first digital single “Rising from the Revenge” can be seen on YouTube:

The band states:
“Choosing the first video from such strong album was difficult this time. Rising From The Revenge was chosen because it reflects the overall heaviness, melody and technicality of the new album.”

The second single “We are One” will be released on February 19th.
You can pre-save the song on Spotify here: https://smarturl.it/WeAreOne_EvilDrive

Tracklist:
Payback
Breaking The Chains
Demons Within
Rising From The Revenge
We Are One
Too Wild To Live Too Rare To Die
Lord Of Chaos
Bringer Of Darkness
In The End
Ghost Dimension