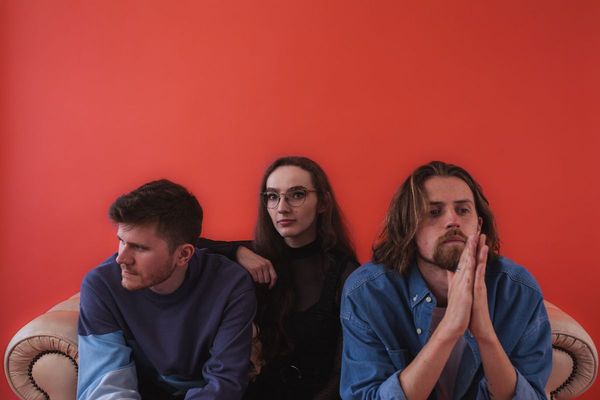 A beautifully curious blend of pop-sensibility, delicacy, experimentation and heaviness. British piano led, guitar-less trio EXPLORING BIRDSONG are paving their own musical path with their new record, Dancing in the Face of Danger, due out March 24 via Long Branch Records.

Their acclaimed 2019 debut EP, The Thing With Feathers – a concept release centered on the Seamus Heaney poem ‘Bye Child’ and the story of Kevin Halfpenny, one of the most bizarre cases of child cruelty ever recorded – caught the eyes of key players in the UK press (Prog magazine, Kerrang! Magazine, Classic Rock Magazine) and achieved two Progressive Music Awards nominations in the same year.

Dancing in the Face of Danger, recorded and mixed at Northstone Studios, Bridgend, builds on the musical foundations of The Thing With Feathers. The five track EP has an evolutionary growth; synthesizers and a live string section add texture and gravity to the piano led core, and whilst the record isn’t conventionally conceptual, lyrically, the band describe each track as ‘having its own tale to tell’.

Watch the video for latest single “Ever The Optimist” HERE:

The first single from the new EP, “Ever the Optimist”, was originally penned when the band studied at LIPA, Sir Paul McCartney’s prestigious performing arts institution in Liverpool. The band’s songwriting talents earned them a one to one songwriting session with Sir Paul, with whom they crafted the skeleton of “Ever the Optimist”. Described by the band as ‘a complete melting pot of all the influences that makes us sound like us’, the single sees the band steer closer to their pop influences than ever before.

Pre-Order Dancing in the Face of Danger HERE:

Tracklist:
CD-EP – Dancing In The Face Of Danger
1 Pyre
2 The Way Down
3 Bear The Weight
4 Ever The Optimist
5 No Longer We Lie

The young group most recently made their European debut at Euroblast festival (Cologne, DE) – their first live performance since their five city inaugural headline tour across the UK in September 2021, including London, Manchester and Birmingham, and following successful support tours with the likes of Sleep Token and Thank You Scientist. Whilst the band refuse to be pigeon-holed to one genre, they evoke moments of Agent Fresco, Kate Bush, Everything Everything, Sleep Token and Karnivool.