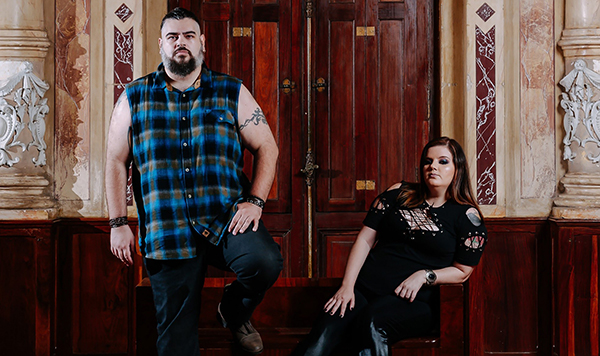 Formed by multi-instrumentalist musician and also singer André Baida, and by vocalist Desireé Rezende, the brazillian duo Fenrir’s Scar releases this Friday, September 4th, their newest single “The Enemy Inside”.

About a month ago, the duo had released the single Curse of Mankind, which took part in two major online festivals with a webclip.

However the band has already brought more news, the song The Enemy Inside. It had its premiere at the online festival LVNA FEST II on Saturday, August 29, LVNA Art’s YouTube channel. The LVNA fest was a charity festival in favor of the NGO Mulheres da Luz from São Paulo, Brazil.

The single was officially released on streaming services on September 4th. Both the single and the forthcoming album “Love | Hate | Hope | Despair” were produced by Fabiano Negri (ex-Rei Lagarto, Unsuspected Soul Band, Dusty Old Fingers), with the participation of Icaro Ravelo (Arkana Fen) in the drums. The single was accompanied by a webclip, filmed by the duo and edited by Ian Pinheiro.

“The Enemy Inside is a song about our inner saboteur. That voice in our head saying that we are not good enough, and that we need to fight that voice. And that sometimes our greatest enemy is ourselves ”- Explains lyricist Desireé Rezende.

André Baida shares a little about the composition and elements of the song: “This is the heaviest track on the album we’ve released so far. This song has heavy riffs, and it was recorded with a 7-string guitar with A tuning, I also used a 6-string bass to bring that weight and modernity that we are looking for in this new album. Our producer Fabiano Negri recorded the synths with more electronic tones to complement this new, more modern metal vibe we were looking for. In addition to recording the guitar solo.”

The track was composed by the musician André Baida and the lyrics were created by the vocalist Desireé Rezende, as well as the single cover art.

Watch The Enemy Inside web clip: