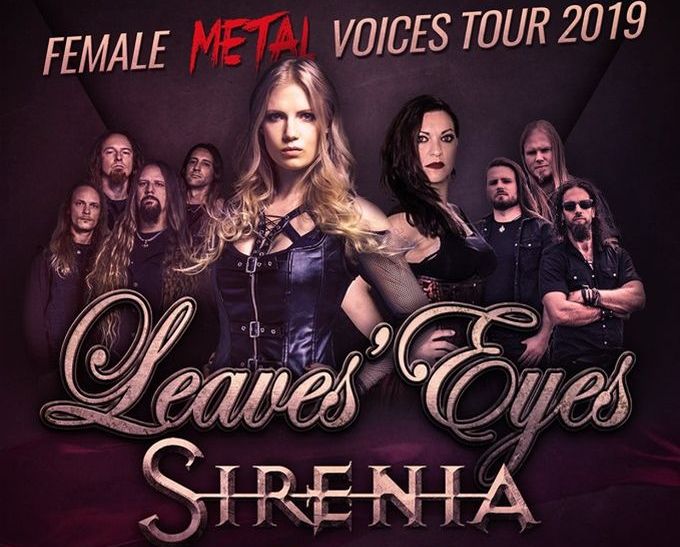 The Flaming Arts Agency presents the 2019 run of the yearly FEMALE METAL VOICES TOUR over EU and the UK. Headlined by LEAVES EYES (DE) and SIRENIA (NO), who are joined by FOREVER STILL (DK), LOST IN GREY (FI), KASSOGTHA (CH) and ASPHODELIA (IT), the tour will run from late November to early December.

LEAVES’ EYES has always been a band of superlatives: The international group has toured on five continents, playing concerts in more than 50 countries. Their live shows are spectacular events with breathtaking stage scenery and Vikings on stage! LEAVES’ EYES have been setting world history to music and have raced to the top of the symphonic metal tree. The Viking sails have been set – Uncompromising, combative, epic – the chartbreakers LEAVES’ EYES! One of the most exciting metal bands just released their smashing single ‘Night Of The Ravens‘ and a brandnew EP will be in stores at the start of the tour on November 22nd 2019!!! Welcome the Vikings!

SIRENIA was formed by Morten Veland in January 2001. Morten’s musical work was already well known through his work with his former band TRISTANIA, a band he co-founded back in the mid-nineties. Being the main songwriter for this band he was a part of defining the gothic metal sound from a very early time on. SIRENIA has released 8 albums, an EP and several singles. Their albums have made it to the charts in 6 countries, receiving great reviews worldwide. Meanwhile their singles have topped radio charts in several countries.

A new spark of hope has started glowing in the darkness of the rock music scene and with their untamed female lead vocals and haunting melodies the new wildfire named FOREVER STILL is starting to spread from Denmark. On March 29th, 2019, FOREVER STILL have released a new album “Breathe In Colours” via Nuclear Blast and is ready to present it live within the Female Metal Voices Tour.

LOST IN GREY are without doubt one of the most promising newcomers within recent years, electrifying their audiences through their suspense-packed story and the terrific sound setting. Inspired by symphonic and folk metal, literature and the world itself, they are promoting their new album “The Waste Land” released in January.

The Italians from ASPHODELIA blend symphonic and choral sonorities, electronics and Mediterranean echoes into a solid metal frame with a strongly dark mood. Their lyrics are usually centered on the theme of the afterlife, on the life and death dichotomy, the fleetingness of time and the misery of the human condition. The band is named after the asphodel, typical Mediterranean flower connected to the ancient Greek Underworld.

Every once in a while, a Swiss band comes along ready to innovate and dominate their genre — think CELTIC FROST, CORONER, SAMAEL, ELUVEITIE. This time, the KASSOGHTA disruptors are hailing from Geneva, with destructive riffs, steamrolling grooves, and sweeping melodies, paired with a female screaming voice that can compete with any growler out there. Just like the aforementioned legends came to dominate their respective genres, ranging from prog thrash to folk metal (or indeed metal itself), KASSOGTHA are ready to take over modern melodic death metal.