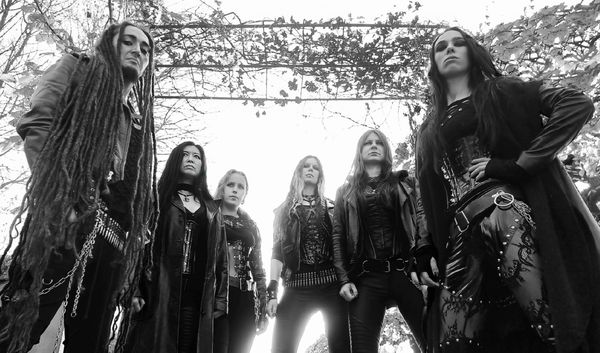 FRANTIC AMBER, the six-piece melodic death metal queens together with BLEEDING UTOPIA (SWE) and THE OVERTHRONE (SWE) will join forces and do a European tour between April 28th and May 7th, 2022.
——————-

FRANTIC AMBER is fronted by five female musicians and was formed in 2008 and released their first EP “Wrath Of Judgement” in 2010.

The release of the EP landed them the opportunity to play on national TV and the prestigious “P3 GULD” awards.
After that, they toured Europe with Six Feet Under.

In 2012 they won the Swedish WACKEN METAL BATTLE and played Wack Festival the same summer.
In 2015 was the year of the worldwide release of the debut album “Burning Insight” and it got great reviews.

Since then Frantic Amber have played festivals like SWEDEN ROCK, KALTENBACH OPEN AIR, METALFEST OPEN AIR and other smaller festivals in Sweden and Europe. They have toured eastern Europe, main Europe and Spain.

In 2019 Frantic Amber released their second album “BELLATRIX” (GMR Rec) and in February 2020 they supported Diabolical on a tour through Europe.

Their sound is an intense mixture of brutal riffs and soaring melodies combined with aggressive growl vocals.
FRANTIC AMBER’s live show is described as an explosive whirlwind of energy with flying hair, a strong stage presence and unique charisma.

With their new single Angel Maker coming out this fall and new album with the same title which will be released in early 2022, this is a band you don’t want to miss

BLEEDING UTOPIA was formed in 2010 in Västerås, Sweden and released their debut album
“Demons to some…Gods to others” (Wormhole death rec) in Oct 2012.

BLEEDING UTOPIA did one Scandinavian tour in 2012 and then wrote and recorded their second album
“Darkest Potenvcy” (Bleeding Music Records/Rambo Music) in April 2014.

BLEEDING UTOPIA has toured EU a few times since the release of their second album and have toured with bands like Broken Hope, and Internal Bleeding. Chronosphere, This Ending, Ablaze My Sorrow, Eshtadur, The Crown, Svart Crown and supported The Black Dahlia Murder.

BLEEDING UTOPIA released their latest album “Where The Light Comes To Die” (Black Lion Rec) in 2019.

THE OVERTHRONE is a young and upcoming band from Stockholm, Sweden, formed in 2018.
THE OVERTHRONE released their debut album “Bloodmoon” (Independent) on April 23-2021.