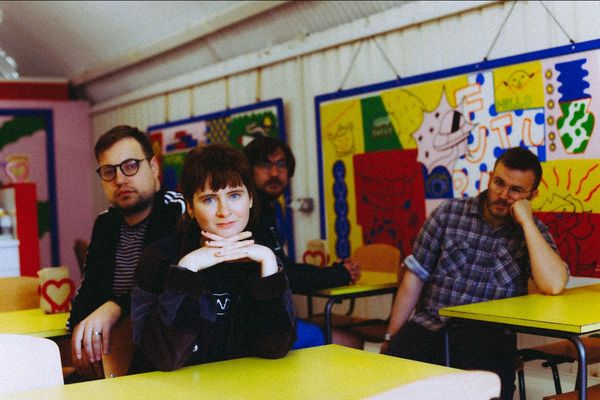 London DIY punks Fresh have shared another track from their forthcoming new album, ‘Raise Hell’, out 1st July on Specialist Subject. New song ‘Going to Bed’ acknowledges the uncertainty and tension of nursing a small crush but going ahead despite the fear and embracing all those ‘I don’t knows’.

“There’s a focus on self-love too, taking typical therapy clichés and self-soothing activities (trust myself more/light a candle etc) made into eerie, sacred rituals and manifesting your own safe space” says lead singer Kathryn Woods.

Fresh has been an unwavering fixture within the UK punk scene since the first record in 2017. A joy to behold live, Woods honed her craft not only fronting Fresh but as a member of several heralded indie and punk bands, including cheerbleederz and ME REX alongside Fresh bandmate Myles McCabe.

The new album radiates with their signature mischievous British charm and flourishes of brilliant pop punk flair – though underestimate Fresh at your peril. ‘Raise Hell’ dares to dive deeper than most, delivering Woods’ darker moments and contemplative thought processes through the sharply focussed lens of upbeat indie punk.

Alongside the announcement of their new album, they shared lead single ‘Babyface’, a song written in early lockdown, “hence the ‘boredom’ refrain” says lead singer and songwriter Kathryn Woods (cheerbleederz, ME REX). “It’s a song about having a mind that’s both overstimulated and under-stimulated at the same time.

The light, airy synths make it a cry for help masquerading as a pop song.” This is a sentiment that runs through much of ‘Raise Hell’ – the push and pull of conflicting emotions, wrestling with opposing personality traits, the tension between learning to self-love and yet wanting more.

Since the pandemic, the band has been working tirelessly behind the scenes writing and recording. They released their EP The Summer I Got Good at Guitar (produced by Rich Mandell at Resident Studios and Marketstall Studios in London) in Spring 2021, to praise from Upset, Stereogum, Brooklyn Vegan, BBC6 Music, Radio X and more.

Since its inception the band has toured with the likes of The Beths, PUP, Adult Mom and more, releasing two albums in the process and amassing a devoted fanbase following appearances at Fest, Manchester Punk Festival and The Fiest in Madrid amongst others.

For a band that have existed for a relatively short period of time, the four-piece have already released a hefty catalogue of work – prolific, ever evolving and always fresh (in every sense of the word).