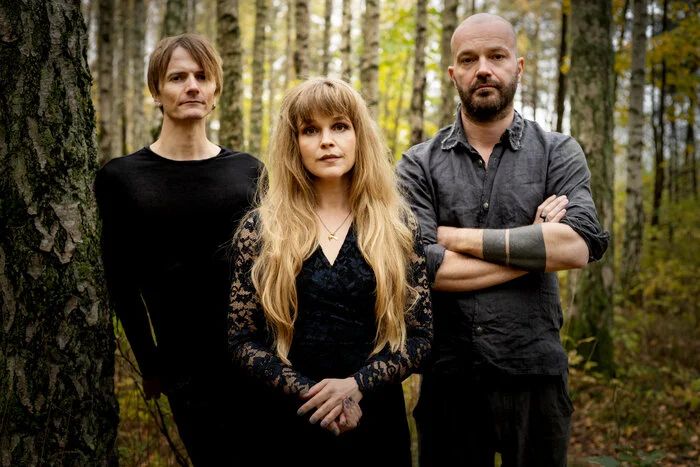 With their upcoming EP “Til Nord” (Eng.: “Northward”) legendary Norwegian folk rockers GÅTE achieve a stunning transformation. The band from Trøndelag, the area surrounding the ancient west coast harbour city of Trondheim, is delivering an emotive, epic collection of tracks revisiting some of their own classics and adding a new track as a taste of great things to come. They are delving even deeper into the musical past of their country, with a contemporary approach. “Kjærleik” (Eng.: Love) is the first single from the coming EP, and you can listen to it here: https://orcd.co/kjaerleik

Gåte about the first single:

“Kjærleik is a song that urges those who love each other to act with honour, pride and kindness. It’s about trust and the opportunity to unfold oneself. To regard one another as a gift, but not an asset. If these elements are fulfilled, love can make people flourish. Equally, it is a song that tells how limiting a relationship can be if sustaining elements of love are absent.”

What Gåte have done to their songs is both breathtakingly bold and amazing to hear. The first single and opening track ‘Kjærleik’ is the perfect example of how they have reimagined their sound. Taking away keyboards, electric guitar, and rock drumming, Gåte have added an archaic percussion style and used acoustic instrumentation. Gunnhild Sundli, whose exceptional vocals which played a major role in catapulting the band to stardom in Norway, has stripped out some of the technical complexity from her singing style and placed emphasis upon folk attitude and expression. In stylistic terms, we see a shift from their energetic folk rock to a darker, more down to earth, Norse-atmospheric folk expression. Yet Gåte remain true to themselves, even when exploring new possibilities within a musical territory pioneered by among others their compatriots Warduna and Faeroese singer Eivør Pálsdóttir.

Playing the old and the new version of ‘Kjærleik’ back-to-back demonstrates that the original remains an outstanding piece, while the reworking amazes with its fresh perspective. Both clearly have the stamp of “Gåte” and revolve around a traditional axis which is given a modern reinterpretation.

Gåte were founded in 1999 by violin player and keyboardist Sveinung Sundli, who recruited his sister Gunnhild as singer. Sveinung’s violin and Gunnhild’s folk song technique “kveding” brought to the sound a firm base in traditional music, which was complemented and contrasted by modern bass, drums, and electric guitars. The resulting folk rock blew both minds and ears. With the self-titled EPs “Gåte” in 2001 and 2002, and their debut album “Jygri” (2002), the band exploded onto their country’s music scene. Their records and celebrated wild live performances won them the Norwegian Grammy (“Spellemannprisen”) for best new band and they stormed the charts. With their second album “Iselilja” (2004), Gåte started to gain international recognition, but singer Gunnhild Sundli moved on to pursue other successful career paths. The Norwegians went into a hiatus at this time, but with their massive National success, they still managed to enter the charts with their live album “Liva” (2006) while in hiatus.

During their absence, the reputation of Gåte kept growing as no other band was able to fill the gap they had left behind. When out of the blue the band announced a tour and returned in 2017, venues sold out at record speed. With their third album, “Svevn” (2018), they again underlined their exceptional status and musical prowess.

Now, instead of comfortably resting on their well-deserved laurels, the band that has always been eager to break new ground and expand their artistic horizon dares to explore a fascinating new path as illustrated by “Til Nord”. At the beginning of an exciting journey into the uncharted corners of Nordic folk, Gåte are standing firmly on home ground as they present yet another stunning masterclass in musical innovation. Here come the Vikings again and this time they bring beautiful gifts.

Lyrics and melody by Knut Buen, arrangement by Gåte