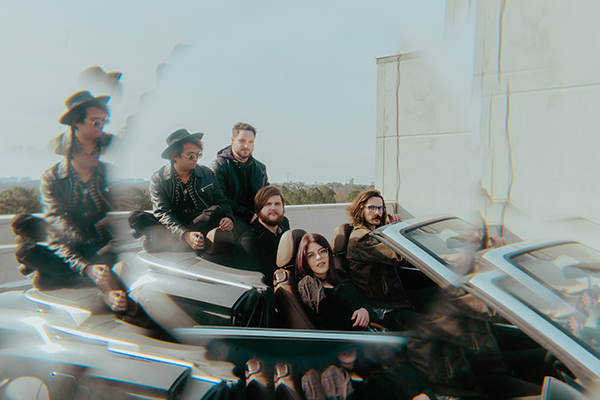 Atlanta-based rock band glimmers has announced their new EP Worlds Apart, due out April 23, 2021 via Common Ground Collective. Along with the EP, glimmers will be sharing a series of cinematic videos that follow a couple through the highs and lows of a relationship. Fans can check out the first video installment today with the release of “Not Good At Goodbyes.” Worlds Apart is available to pre-order ahead of its release now at cgc.lnk.to/WorldsApart

On Worlds Apart, glimmers vocalist Maggie Schneider shares, “This EP means a lot to all of us because it represents two years of hard work. It is a concept record, from the very first song to the last. Each of the five songs follows the progression of a relationship, as well as the stages of heartbreak: love, loss, denial, bargaining, hope, and acceptance. Will our characters get back together? Or will they remain worlds apart? It’s up to you to decide.

We decided to create a music video for each of the songs to follow this story, with each piece connecting to each other as the next episode of the relationship. Our videographer and great friend Deanna Elise brought these songs to life, and created the story with Maggie. Altogether, all five music videos create a short film, inspired by our favorite 90s and 2000s romance movies.”

Along with the EP announcement, glimmers has shared their new single “No Good at Goodbyes” featuring Nick Pena of lostbody. The emotional duet would sound right at home in any coming-of-age movie, telling the story of a relationship on the brink of collapse.

“‘Not Good at Goodbyes’ is a confession of love – it’s about my difficulty letting go of people, and saying goodbye to relationships. It hurts when the person you love leaves, whether it’s temporary or forever. This is the last-ditch effort to say everything you want to say, before it’s too late. I really hope listeners feel a special connection to this one,” Schneider shares on the single. “‘Deanna and I wanted the beginning of our couple’s story to look like a coming of age movie. Every scene is from a different point of our couple’s relationship, and introduces the story that’s carried through all 5 songs. We focused on filming memories made in cars because that’s where I’ve shared some of my favorite moments.”

Fans can watch the accompanying music video for “Not Good at Goodbyes” now at youtu.be/y0a06Ty03j0