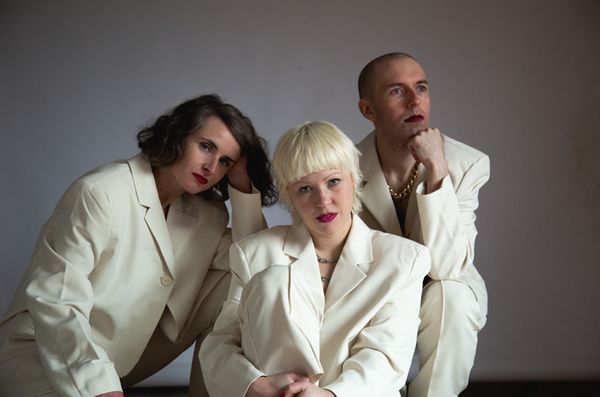 Debut album TUESDAY. NOTHING EXISTS.
out THIS FRIDAY via TULLE Collective

Featuring current and former members of PINS, Girls Names, and September Girls, today GRAVE GOODS share new single ‘DIE’ ahead of their debut album TUESDAY. NOTHING EXISTS. out this Friday via TULLE Collective.

‘DIE’ is about so many things. It’s about asking why we are here and realising there is no real answer apart from the one you choose for yourself.  It’s a happy song. It is about how waiting for something to allow you to live your best life is a dangerous game and a waste of time, “When I have or do this or that, things will be better” that time is now.

It’s about the fragility of existence and that every beautiful moment we get to exist could be your last and suggests this is something to be celebrated not feared.

Watch the video for ‘DIE’ HERE

“Lois sent us the idea for DIE as a sort of electronic track, and when we were all together we worked out how to make it into a live band sound and add our own stamp to it. Whilst recording at Invada we felt that the build up towards the end of DIE needed more layers, so Lois and Phil tried out a couple of synths and settled on a sound that worked – it’s the only song that has synth.

During the last 15 minutes of our recording time Phil added extra layers by messing around with some guitar feedback – the final sound to be recorded on the album, which is kind of special when you think about it especially as DIE is the closing track of the album.”

The video is based on the story of Sisyphus who tried to cheat Death and was cursed to push a boulder up a hill only for it to roll back down and then have to start again.

Three Psychopomps prance in Purgatory. The Psychopomps (Lussh, Suzi, Xoo) inhabit the space between our consciousness and unconsciousness, they pass no judgement, but entertain us whilst we expire. It stars Club Clam, a female and non-binary collective, that specialise in provocative performances and events.

The concept was once again by singer Lois Macdonald, including the choreography which uses repeated actions to explore the passing of time and significant events and memories – it also includes a move inspired by the rise and fall of Sisphus’ boulder, to represent the importance of accepting your failures just the same as your successes.

The balls they are dancing with increase in size, like our burgeoning awareness of existence, as each day and year passes.

TUESDAY. NOTHING EXISTS. out this Friday via TULLE Collective.
Pre-Order HERE

Lyrically, debut album TUESDAY. NOTHING EXISTS. was spawned via Lois’ love of Nausea by Jean-Paul Sartre as it summarises our existence, and she felt like someone had written down how she sees the world.

The album’s lyrics are all exploring existential philosophy, and about how everything is pointless so everything has complete meaning, and only you know what that is for you. Whilst musically they wanted the sound to be minimal, uncomfortable, unusual, angular, and abrasive.