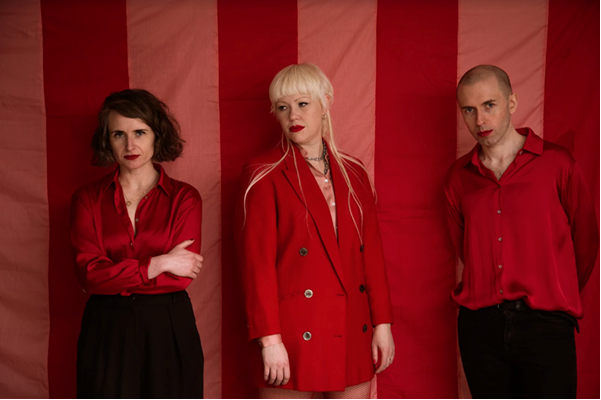 Taking influence from early post-punk and minimalist rock, the music of GRAVE GOODS has been described as urgent and demanding, claustrophobic yet spacious, and they’re guaranteed to grab your attention.

Featuring current and former members of PINS, Girls Names, and September Girls, the sartre-rock trio are based between Manchester, Belfast and Dublin. Their influences come from early post-punk and minimalist rock, with music that is visceral and angular, set against a lyrical backdrop of existential ennui.

Today, GRAVE GOODS announce debut album TUESDAY. NOTHING EXISTS. out 9th September 2022 via TULLE (home to M(h)aol, Fears), and share new single ‘Come’ which is a song about revolution.

Singer Lois Macdonald says on the track, “This is one of the first tracks we wrote, and for me the one that helped to cement the feel of the music we make. I wanted to use the guitar in a percussive way, and I wanted the track to feel stressful and furious. I felt frustrated at the time and had so much to express. I wanted the lyrics to reflect all this, and to come from the gut.  The best noise I could imagine for this is ‘Ugh’ which I use towards the end – it represents frustration, disgust and sex.”

The video also comes from Lois, starring four pleasure demons. There’s Urth – mother of nature, sprouting roots to ground themselves and always thirsty. Jeen – the ghost of the mother of Brad Pitt’s character in Thelma And Louise, they have seen and done it all. Monarch – demonic royalty of the highest order, not to be disobeyed unless you like that sort of thing. And finally Trubble – the most depraved of the demons with an insatiable lust for pleasure. Trubble experiences every orgasm that occurs on earth and as a result finds it difficult to concentrate.

Watch the video for ‘Come’ HERE

Lyrically, debut album TUESDAY. NOTHING EXISTS. was spawned via Lois’ love of Nausea by Jean-Paul Sartre as it summarises our existence, and she felt like someone had written down how she sees the world. The album’s lyrics are all exploring existential philosophy, and about how everything is pointless so everything has complete meaning, and only you know what that is for you. Whilst musically they wanted the sound to be minimal, uncomfortable, unusual, angular, and abrasive.

Previous track ‘Juice’ was featured on A Litany of Failures Volume III, and in December 2021 they shared ‘Phonetic Fetish’. Amongst others they have opened for Beak>, HEALTH, and Jon Spencer & The Hitmakers, plus played various festivals in Ireland and the UK.

They’re set to support breakout feminist post-punk band M(h)aol at The Grace in London, on 19th July with tickets on sale now here, as well as We’ve Only Just Begun festival in Dublin on 5th August.

TUESDAY. NOTHING EXISTS.
Out 9th September 2022 via TULLE