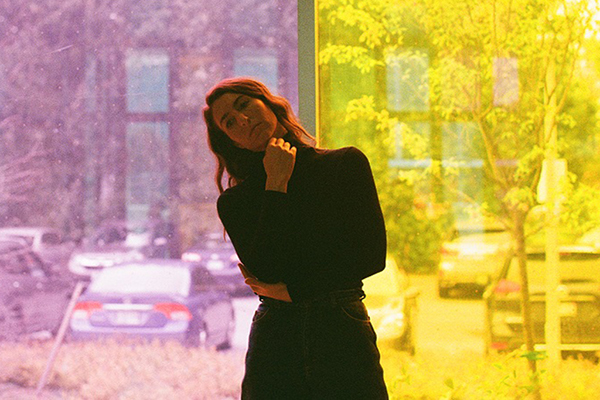 “Produced by the National’s Aaron Dessner, the Canadian songwriter’s latest [Just A Phase] recalls that band’s latter-day best—but her day-dreamy lyrics dovetail beautifully with the soft, cascading production.” — The Guardian

“…the sparse, staggering ‘Pray It Away,’ in which she attempts to reconcile her beliefs with those of her conservative family, is particularly raw. …[Aaron Dessner’s] immersive production, including layered keyboards and twinkling harmonics, pairs perfectly with her elegant voice” — UNCUT

“‘That Emotion’ is a meditation that subtly hints at that feeling of emotions starting to pile up and surface…Georgas’ voice is certainly the highlight, a calming force even as she considers a more disoriented headspace”
Stereogum

“With soft guitar tones and an even gentler singer voice [Georgas] turns “That Emotion” into her own fortune cookie slip of truth, doling out comforting advice like a new generation’s Feist.” – Consequence of Sound

On September 4th, Toronto artist, Hannah Georgas, who, over the years has been an active touring member of The National and Kathleen Edwards, will release her new LP All That Emotion on Brassland and Arts & Crafts. Produced by Aaron Dessner, founding member of The National and producer of Taylor Swift’s latest LP folklore, the album has already attracted an enthusiastic critical response with the mesmeric lead single “Dreams,” the calmly enveloping “Just A Phase” and pre-announce singles “That Emotion” and “Same Mistakes. In a recent Instagram Live chat with Kate Stables (This Is The Kit), Kate also acoustically covered “That Emotion”. Watch it here.

Today, Georgas is sharing her final single from the LP, a slow-burning synth pop gem entitled “Easy“. Introduced by pulsing arpeggiators and a subtle blend of electronic drums and organic percussion, the track builds towards a glittering crescendo, with Georgas’ weaving in and out of harmonized vocal parts as she chronicles a search for closure at the end of a relationship.

“I was going through a break up around the time that I wrote this song and I felt like I kept searching for some sort of closure or definitive ending to the relationship,” says Georgas. “I found myself feeling frustrated that I couldn’t communicate well with this person and whenever I tried to reach out I was left feeling more alone in the end. I was going through this hard time and it felt like they found it easy to let it go.“

Hannah Georgas began creating the album All That Emotion about a year after the release of her celebrated 2016 album For Evelyn —starting with an intensive process of writing and demoing songs in her Toronto apartment, and finishing with a month long retreat in Los Angeles. She began the record making process in the middle of 2018 when she traveled to Long Pond, the upstate New York studio & home of producer Aaron Dessner of The National.

“Before each session, I would make the long drive from Toronto to Hudson Valley in Upstate New York.” Says Hannah. “It was really special getting the opportunity to work in such a remote space with Aaron and Jon and I was always itching to get back whenever we had breaks. At the same time, I appreciated the space in between and coming back with fresh ears.” Hannah continues, “Aaron and I agreed the production needed to bring out the truth in my voice. During these sessions we musically found a new depth and, vocally, a delivery that was more raw and expressive, allowing the emotional texture of each song to shine through.”

The writing of the album found Hannah creating her most personal album to date. “All That Emotion’s album cover is an old family photo,” says Hannah. “I love the image because it captures this calm confidence. It looks like people are watching a performance and it seems like he’s diving in without a second thought. Similarly, I find that it parallels the approach needed within art. The calm confidence of expressing yourself without the thought of consequence, regardless of anyone watching.”

On the album, you’ll hear about bad habits and prayerful families—right and wrong love—mistakes and moving on—casual cruelty and most of all, change. Plotting the boundaries of where to place this music it’s emotionally fraught but warm & fuzzy. “An indie-minded avant-pop artist” was the Boston Globe’s formulation for her charms. Think of Fleetwood Mac meets The National; Kate Bush-sized passion with the earthiness of Cat Power or Aimee Mann. The album grows inside you and sticks to your insides. The songs are big tent anthems, rough at the edges but relatable.

Hannah continues: “I still have long conversations with my friends over the phone, talking about love and relationships, pain and heartbreak, our upbringings and the hardships that come along with that.” In an era of social media quips and hollow memes, maybe it’s this kind of one-on-one contact a form of communication worth getting back to?

“In this way, I get a lot of lyrical inspiration through the individuals I interact with in my everyday life,” she says. “Then music becomes the forum where I work out these feelings, embrace and express pain and love, joy and anger, frustration and fear and hope. It’s where I can be uncensored, not hold back, and say what I want to say. In that way, making music is a cathartic and cleansing process. It’s always the best feeling when someone tells me my music has helped them out in some way. That keeps me going.”

All That Emotion will be released September 4, 2020 on Brassland / Arts & Crafts. It is available for pre-order HERE.