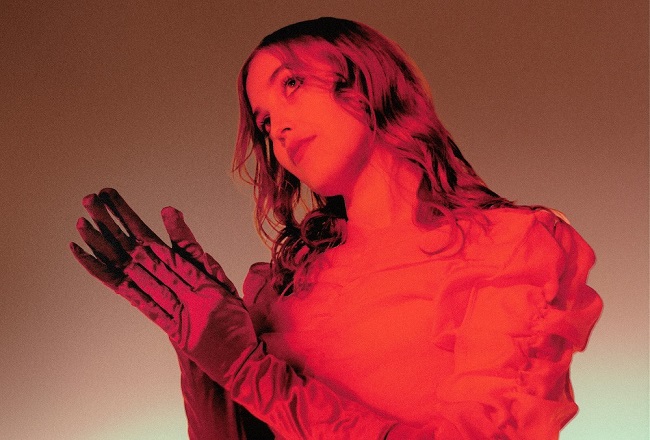 Today Hatchie has shared the title track from her forthcoming second album, ‘Giving The World Away’, set for release on April 22nd through Secretly Canadian.

‘Giving The World Away’ shows a deeper, moodier side to the world of the Brisbane, Australia-based artist, and never-more-so than on this latest cut – a euphoric hacienda-ready track about self-destruction. “Giving The World Away’ is about being gentle with yourself in the throes of depression,” says Hatchie. “We made a simple lyric video with analogue effects to let the lyrics of the song speak for themselves.”

The track follows last month’s album announcement and striking yet moody lead single, “Quicksand,” marking the start of a chapter in which Hatchie infuses her dazzling dream-pop and shoegaze tangle with a deeper and more honest portrayal of herself. “There’s more to me than just writing songs about being in love or being heartbroken — there’s a bigger picture than that,” she explains. “This album really just feels like the beginning to me, and scratching the surface – and even though it’s my third release as Hatchie, I feel like I’m rebooting from scratch.”

For Hatchie, that bigger picture explored here includes confronting her anxieties after decades of compartmentalisation; realising her own self-confidence and self-esteem; taking control of her own narrative, and her place in both her professional and personal life.

Produced by JorgeElbrecht, recently GRAMMY-nominated and known for his work with Sky Ferreira, Japanese Breakfast, and Wild Nothing, ‘Giving the World Away’ is a sprawling work. Featuring extensive input from longtime Hatchie collaborator Joe Agius, it takes the celestial, shimmering shoegaze and pop sensibilities of her earlier releases, but with the volume knob cranked up tenfold. Built out with percussion from BeachHouse drummer James Barone, it’s synthed-out, sonic opulence, a more structured and ornate musicality with traces of ‘90s trip-hop and acid house influences.

‘Giving the World Away’ is an album about self-confidence, about reclamation, about the strange time in young adulthood where you begin to finally be able to see yourself clearly. Incisive and probing, it is the clearest look at Hatchie yet, and a relic of the power and bravery that spring forth from embracing vulnerability and putting your heart on the line.

‘Giving The World Away’ will be released on April 22nd on Secretly Canadian. Pre-order & pre-sale links here.

‘Giving The World Away’ artwork: