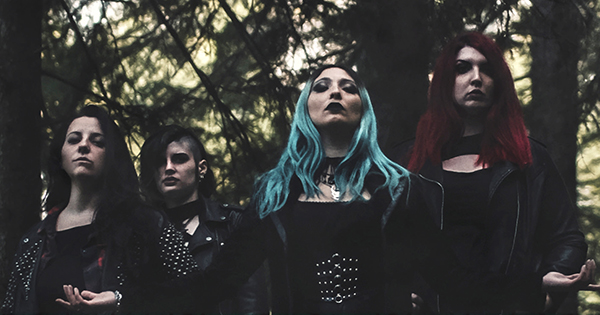 HELLFOX: debut album out on Jan

Music for the Masses has the pleasure to announce the agreement for the release of the debut Album of the Alternative Metal all female band HELLFOX with the debut album The Call.

The album, scheduled for release on January 21st 2022 features 7 new tracks plus the remastered Version of “Dead Star”, released in late 2020, which gathered consensus among press and fans.

The album will be distributed in Italy by EGEA MUSIC Italy, in Europe by CODE 7 UK and by WORMHOLEDEATH Japan, besides all digital platforms.

Hellfox trademark is represented by the dualism between Greta and Priscilla’s voices, which intertwine while telling the tales of the album.

But let the band members’ words speak for their own:

In spite of four rather different musical backgrounds, we’re on the same page on the inspiration we draw from Amorphis, In Flames and  Dark Tranquillity in the process of songwriting, while we’ve chosen to detach from the Symphonic context, widely regarded as feminine, inserting acid, distorted synths in order to create a modern mood we felt our own and committed more adherently to the pop vibe of Greta’s melodic voice.

The dualism existing within HELLFOX is not to be meant as a conflicting one, it’s rather the result of different voices interacting inside the human soul, different faces if we want to put it down this way.

Faces mingling and generating the person in itself, in its entirety, who create and live in harmony and balance although seemingly clashing one another.

We do not use masks to conform to the mass, while we don’t even want to distinguish ourselves at any cost, in a society where normality is a mere surface.

The abyss, on the other hand, is made of countless personality facets, both for the collective and the single human being.

Our message is accessible to all, everyone can recognize it in her or himself: that small, tiny voice in your head which attracts or repulses you…’cause nothing is normal for us, nothing is different.”

Hellfox was born from the 4 members’ different musical tastes and influences. We’re not trying to fit into a genre, our music expremes the need to convey what we have behind the mask everyone wears in every day life, independently of what we are.

Instrumental parts are made of acid and distorted sounds with great atmospheres, where two voices fights with each other’s.

The band formed during 2019 winter, thanks to the Greta and Priscilla rediscovered friendship. In February 2019 they find Gloria, and after a long and exhausting research, finally they find Federica to properly complete the band.