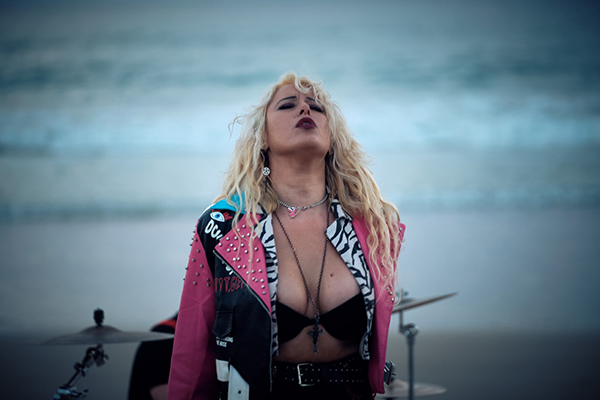 Brisbane female fronted Hard Rockers Hit ‘n’ Mizz release their new single/video Burn. The song is part of the planned album which will be revealed later this year.

Unlike the rest of the songs from the EP Action (released February 2021), Burn has more of a melodic acoustic sound. This takes the band’s rock style a little closer to country rock music showing their fans another side of their music ability. Loud and punchy is transitioning to soft and gentle but keeping the metaphoric lyrics and eccentric rock style.

Lead singer Mizzie Maxx explains: “I started writing the song on guitar not knowing how the band would take to it. Once the boys heard the song, they turned my acoustic ballad, which can be heard in intro of the song, into melodic country sound. They kept the rawness and the  emotion through the track.

At the time of the recording, the band lost its bass player Slije and gained a new one Clintron. However, Slije plays on the track. The night before the film clip was filmed for ‘Burn’, Slije was asked if he would like to be apart of it. He agreed. You will see 5 members in the film clip who will be continuing all onto the album. It shows the calm after the storm. ‘Just one more shot, It’s all you got’.

Bio
Formed in 2018 in Brisbane, Australia, Hit ‘n’ Mizz is developing into a sought after Hard Rock band. After finding herself at a cross road in the music industry and wanting more Mizzie rounded up members from other bands (stole them) and started rehearsing and performing live with her original music.

Mizzie Maxx is the ultimate bad ass front woman who struts her stuff with confidence. Her performances are never dull. She morphes from a punk princess to a rock queen showing her versatility and testament to her growth as a musician.

The band is a powerhouse combination of your 80s rock with a punk attitude. It has one aim and that’s to have fun and play music. Together the band is Mizfits and Bratz just like its fans that have come together for the love of rock n roll, and are hell bent on delivering a rock show.