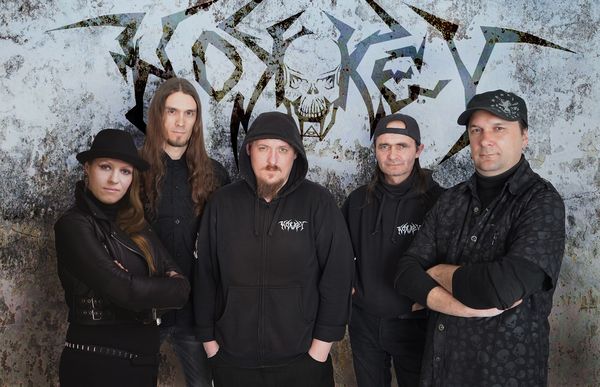 Hok-Key has signed a digital distribution deal with Wormholedeath for its album “In Existence”, which will be released on February 25th, 2022 worldwide.

Signing statement:
We’re really happy to work together with Wormholedeath records as it is a chance to spread our music around the world. We had good vibes during our communication and think that our cooperation will be successful and fruitful.

About the album:
Seven elements are the basis of both creation and disruption. So is the essence of existence. Let’s see where the scales will go:The “bricks” we’re given could be used to build the Paradise,
But, well, we still ignite the fuse and pay the overprice.

A year later Hok-key started to work on a new material. Over the 2000 – 2002 period Hok-key played about twenty concerts in Belarus and abroad, took part in numerous festivals, radio and TV talk shows.

Hok-key is vivid representative of the Belarusian metal scene who has taken the path from comedy metaldirectly to its present form – philosophical texts and constant musical and sound experiments, and could be described as melodic metal with folk influences.

The band is broadcasted on radio stations, actively participates in various festivals and concerts both at home and abroad. In 2015 band was on a road during «Thunder and Lightning European Tour».

In 2017 – 2018 during “Reaping Europe Tour” band has visited almost all countries of Europe from Poland to Portugal.
Hok-key already has 5 LP in its discography, so “In Existence” will be the sixth one.