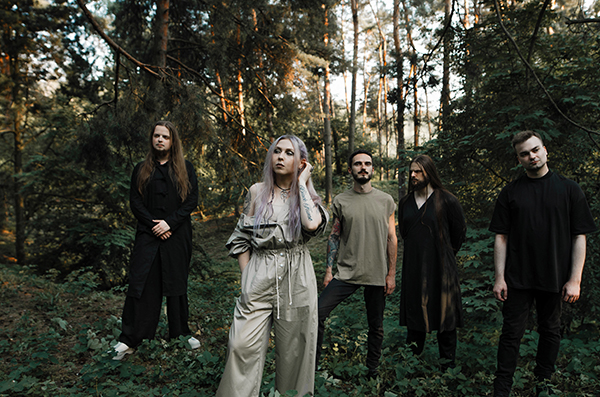 In June 2021, IGNEA signed a deal with Napalm Records and started working on the third album that is planned for 2022.

Before bringing the new full-length record to the world, the band treats its fans with the split EP BESTIA recorded together with their friends ERSEDU.

BESTIA is a concept EP about the human nature of Ukrainian mythological creatures and the world’s duality. In Ukrainian, BESTIA (Ukr. «бестія») means both a savage beast and a mischievous person. This is a split record that consists of songs by two Ukrainian bands — IGNEA and ERSEDU — and is a result of their 10-year friendship.

BESTIA will be out on all streaming platforms on October 21, 2021, as well as on digipak CD and vinyl. The physical formats will also contain The symphony of BESTIA — a mix of orchestral arrangements used in the five songs from the EP. The pre-order for merch and CDs starts on September 10 on IGNEA’s website. The pre-order for vinyl starts on September 15 at RockMark.

The new single Mermaids is available on all platforms – https://ffm.to/mermaids

The EP starts with two songs by IGNEA. Bosorkun is an intense fast-paced track that sounds like the Carpathian wind: fierce and chill, rapid and still, unpredictable and changing, unstoppable, powerful, yet lighter than feathers. According to Ukrainian mythology, Bosorkun is an evil mountain spirit who kills with the power of the wind and sends drought and illnesses to people and animals. In IGNEAs’ song though, he’s a ‘spirit with a kind but destructive nature’ who wants to make friends with humans and trade his immortality for their world.

The second track is sung on behalf of the Slavic valkyrie, the winged, warlike, cloud maiden, the daughter of the Thunderer Perun — Magura. With her wings, she overshadows the brave soldiers fallen on the battlefield, touches their lips, and gives them the living water to drink from a golden cup. This is how these soldiers end up in Vyriy, the heavenly palace for eternal life. In Magura’s Last Kiss, Magura is fed up with wars and says that ‘peace can be bold and knightly’. To end all fightings, she kisses herself, goes to Vyriy herself.

Mermaids is a song about Ukrainian mavkas (sirens) who cannot find their place anywhere: neither on the shore nor in the waters. Just like humans, they are bored when their life is in balance, and they’re trapped in the problems that they create on their own. This song features both bands and is also accompanied by a cinematic music video that will premiere on September 15.

The second part of the EP consists of ERSEDU’s two songs about the dual nature of the world. Black Garden tells the story of Zmiy, the Ukrainian dragon who could destroy and poison the gardens and lands but also take away disasters from humans. Seduction of the girl by Zmiy is a popular folklore plot, and this is what actually happens in the song: Zmiy seduces the girl with his black love and she accepts him, dissolving in his nature.

The Eaters of the Sun is a cosmogonic myth about the ambivalence of kindness and evil, light and darkness, the neverending cycle of day and night. The Sun — the embodiment of the supreme god and goodness, blind obedience to dogmas — can burn and destroy lives. Darkness — the personification of evil and independence — can save from the deadly blinding light, become a savior and ensure critical thinking. The Eaters of the Sun is the hymn of balance and rational human who accepts light and darkness as his parts, and himself as the part of Cosmos and bestial creatures.

Highlights:
— 1 EP, 2 full-length albums, 5 singles, 8 official videos
— according to the national awards The Best Ukrainian Metal Act, The Realms of Fire and Death has been selected as the metal album of the year and IGNEA has been named the best Ukrainian metal band of 2020
— released the first-ever original song from a Ukrainian band, recorded with a full symphonic orchestra — Alga (over 6 million views on YouTube)
— being fully DIY, IGNEA gathered an extensive following of fans from all continents of the world and performed in Europe within tours and festivals
— The Realms of Fire and Death album was fully funded by the band’s patrons at www.patreon.com/helleignea
— all releases are recorded and mixed by Max Morton

ABOUT ERSEDU:
ERSEDU is a symphonic death metal project filled up with noir cinematic epics of Antiquity. Their music is mainly inspired by Septicflesh, Devin Townsend, Alan Silvestri, Gustav Holst, Jerry Goldsmith. Each song is an endless worship to the beautiful Darkness, a story told with sensual clean vocals, otherworldly growls, and massive orchestral arrangements.

In 2011, ERSEDU released a full-length album NC-17 and took a break that ended up lasting 9 years. In the meantime, the Ukrainian duo was working on other projects as composers and orchestral arrangers.

Ten years of friendship with IGNEA and Covid-19 pandemic 2020 opened a new chapter in the metal life of ERSEDU. Prepare to dive into the BESTIA!