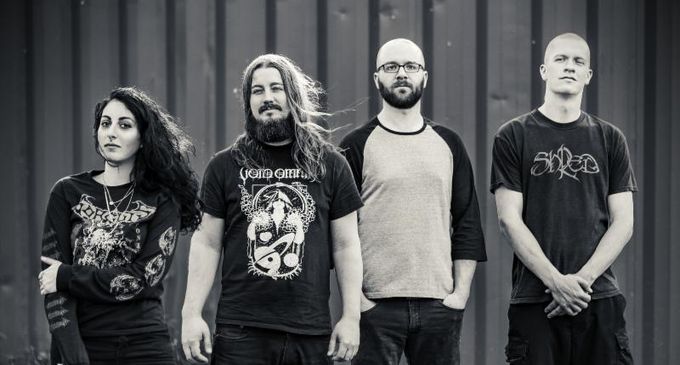 Writes the esteemed blog, “A tour-de-force demonstration of the feral rage of which the group is readily capable, the track explodes into violent action with a dissonant blackened staccato riff and thundering blast beats before vocalist Rae Amitay’s derelict vocals descend upon the grime and chaos of the group’s sonic misanthropy. The album’s longest and most sprawling track, ‘Avolition’ progresses with a forlorn yet majestic pace, seemingly leaning more heavily toward black metal before introducing a decidedly death metal passage just before its halfway point. In its final moments, the song takes on an almost melodic demeanor with melancholic treble guitar leads melting into an airy acoustic outro, leaving the listener bewildered after running a true aural gambit.“

Read more and stream “Avolition,” exclusively via Invisible Oranges, at THIS LOCATION.

IMMORTAL BIRD‘s Thrive On Neglect will see release on CD, LP, and digital formats July 5th. For physical preorders, go to THIS LOCATION. Find digital preorders at the 20 Buck Spin Bandcamp at THIS LOCATION where previously released tracks, “Anger Breeds Contempt” and “Vestigial Warnings,” can be streamed.

Thrive On Neglect takes the perilous road of musical diversity and commands it with a bloodthirsty rage. With a multi-layered sound running the gamut from pummeling grind and death metal to dissonant blackened metal, angular noise, and complex hardcore, IMMORTAL BIRD defies simple categorization. The band’s compositions fuse into strikingly savage songs, vast in their scope and more than the sum of their disparate parts, merging the progressive and destructive into a maelstrom of raging fire. Rae Amitay’s seething vocal exorcisms and targeted lyrical aggression provide the connective tissue holding the stylized violence together.

“A band making beautiful music for a broken sort of person.” — Kerrang’s 50 Best American Metal Bands From The Last Decade