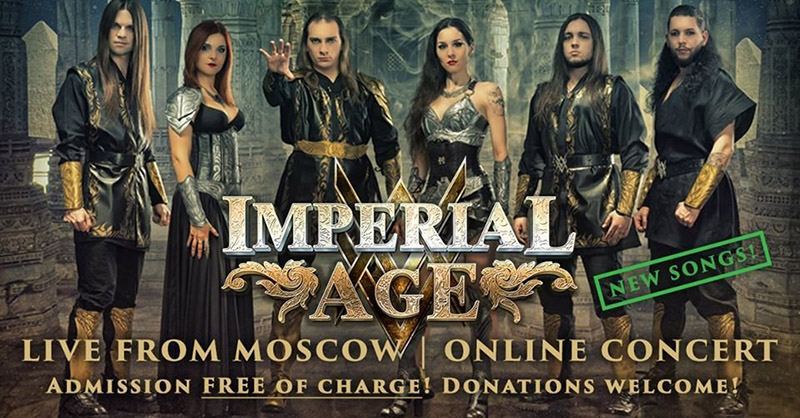 On April, 25th IMPERIAL AGE streamed a180-minute online concert from locked-down Moscow and achieved ground-breaking success with 14,000 people watching on YouTube and 24,000 views on Facebook – which adds up to a virtual stadium show. The band’s global audience was streaming the live concert from all 7 continents, including Antarсtica.

Admission was free of charge – anyone could stream the show. IMPERIAL AGE had invested $2,600 of their own money to produce this event and expected to recoup it at best, but the result surpassed all, even the most optimistic expectations: the fans donated a whooping $9,796 and bought music & merch for another $1,681 while watching the show. The total amount the band raised on this event amounted to $11,477.

The broadcast was made with 5 TV cameras and full cinematic and stage lights in Full HD quality (1080p), involved 20 people (all with government-issued QR code passes allowing to work during lockdown) and took 3 hours. IMPERIAL AGE played 21 songs – including 2 new ones from the upcoming album – and in-between the songs answered some of the questions that the fans were posting via the online chat in real time.

“This has just been our most successful show so far. You guys rock. Big bow to all of you! you are our world.” – wrote band leader and lead singer Aor after the show on the band’s official Facebook page.