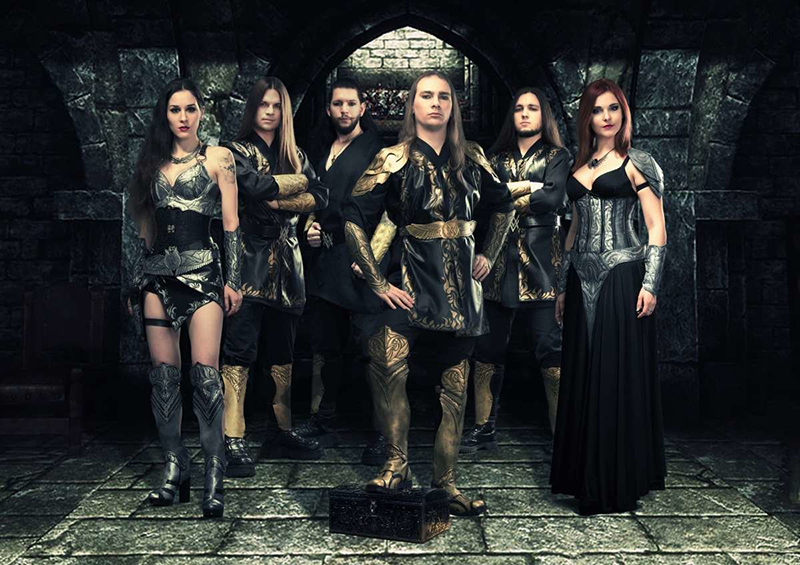 Two great modern-age Empires are home to IMPERIAL AGE: Russia and Great Britain, since leader and co-founder Alexander “Aor” Osipov has always lived between these two worlds, his family being from Ayr, Scotland, while he himself resides in Moscow, Russia.
But that is not what Imperial Age is about.
Formed in 2012 by Alexander Osipov and Jane Odintsova in Moscow and endorsed by genre founder Christofer Johnsson (Therion) himself, today Imperial Age is Russia’s most successful symphonic metal act and the country’s second most internationally touring metal band. The special fact about them is that they declined three offers of famous labels.
Imperial Age have brought the idea of symphonic metal (and metal in general) to its highest maximum, elevating the innate qualities of the genre – loftiness, solemnity, grandeur and overall majesty – to the highest spiritual altitudes known to rock. Today, Imperial Age use the most influential form of art (music) in its most powerful and diverse genre (symphonic metal) to inspire, empower and fill the souls and hearts of people with purest energy that enables to accomplish great deeds.
This is the type of music that can change people’s destinies.
This is not the type of metal that drives into depression.
And this is not the type of metal that entertains.
Imperial Age does what Heavy Metal has always been meant to do – to elevate and inspire, to fill with power and belief, to open up the way towards greatness and to illuminate The Path for those seeking to tread upon it.
Backed up by the colossal might of ancient forces, the great Imperial Age has begun.
Tune in, and become part of the great cause that spans through millennia!

The new live DVD is out now!
“LIVE ON EARTH: The Online Lockdown Concert” was recorded during their legendary online show, when people from all over the world were locked in their homes and didn’t really understand what to expect.
On 25th April, 2020 the band and their crew gathered in one of the studios in the city of Moscow.
They had all the necessary documents to get through the police roadblocks and remarkable courage, because everything was closed and no-one seemed to be working at that time.
IMPERIAL AGE performed this special show for 3 hours, which was streamed all over the world and watched by 38.000 people (even in Antarctica) who donated $11,477 to the band, who had invested a lot of their own money into organizing this event. Together with the sells of the DVD the band made about 30.000 $ – and all this as and independent band.
“Live On Earth” was recorded with 5 video cameras and 32-channel audio multitrack, and now the DVD is out and ready to impress the band’s fans with 5.1 audio and 1080 (full HD) video.
The DVD also includes a Q&A and a “Making of” as bonus.

IMPERIAL AGE are still doing everything DIY, keeping the complete artistic control and refusing offers from well-known labels over the years.

LIVE ON EARTH is available for order at the official website of IMPERIAL AGE and also on all the digital platforms, including Spotify:
https://imperialage.lpages.co/live-on-earth
https://imperial-age.myshopify.com/a/offers/f/19096/1/loe