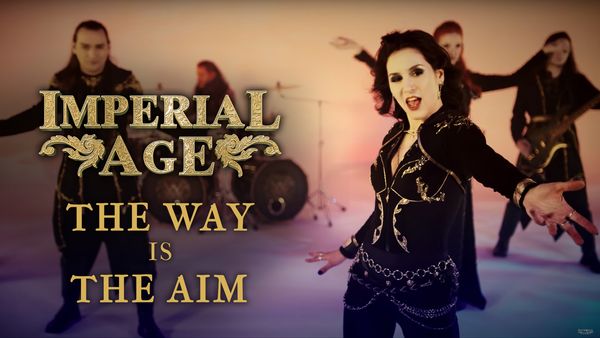 After protesting against the invasion of Ukraine and 4 out of 6 band members leaving Russia (Aor and Jane – to Turkey, Anna and Paul – to Montenegro), Imperial Age released “The Way is The Aim” – the first single and music video off the upcoming album “New World”, for which the band’s global fans pledged more than US$ 65,000 during crowdfunding in July-August 2021.

“It has been more than 4 years since we published any new music. Lots of things happened since then to ourselves and the world, but finally, backed by the colossal support of our phenomenal fans, we are ready to start unleashing our “New World” album onto… well, the (New) World!

The first single & music video is called “The Way is the Aim” and it spearheads the main theme of the album: Freedom. Freedom of finding and having your own Path in the World. Freedom of thinking your own thoughts. Freedom from everyone and everything. Freedom to explore and learn. Freedom to lead a peaceful and meaningful life.

We all have a choice: follow your own Path, or follow someone else’s. The first brings positivity and joy, and charges you with energy. The second brings negativity and tiredness, and drains you.

Follow your own Path, find your own Purpose. Listen to your Heart. Filter out the Noise, see through the Fog of Negativity and always remember: You are the Light in the Darkness!

And don’t forget to smell the flowers along the way: because there is always another goal after this one. There is always a bigger fish. But its the Way itself that is the Aim!” – the band wrote on their Facebook.

Stream “The Way is The Aim”.