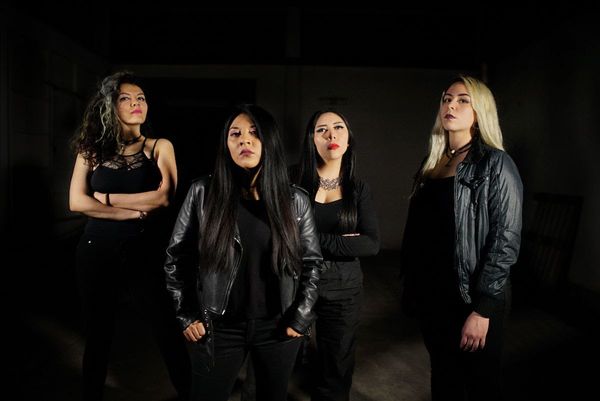 We all know image sells. A big part of the female-fronted metal is based in more or less extreme metal bands fronted by good-looking girls with pictures made for magazine covers and social media.

However, the South- American response to that wave has been astonishing and plain brutal. Female bands such as Nervosa and, later, Crypta, aimed at extreme metal done to perfection first, and feminine-look appeal later and the response has been astonishing. Introtyl, from Mexico, might as well be the latest big thing in this revenge wave from the continent.

With a relentless approach to death metal, as a result of a too many Monstrosity and Deicide diet in their formative years, the Mexican girls base their approach in technical perfection and ultimate brutality.

Their shows are grinding machines that quickly earn them a peers respect in a male-dominated scene even before they released their debut album in 2018. And even if pandemics stood in the way of their stage domination, they took the downtime to record their new full-length “Adfectus”. And, boy, what a record.

Eight clean cuts of pure death metal, done the only possible way if you’re looking for unadultered, precise brutality. Sariux and Annie provide the perfect rhythmic brick wall to Rose sharp riffs and Kary ferocious roar, in a sequence of killer track after killer track that beats you down like you’re caught alone in a Mexico City backyard alley.

“Adfectus” is out today on LP (deep green/black vinyl, limited to 300 copies), CD and digital format, via Emanzipation Productions. Orders are available here and here.

“Introtyl” is composed by two words: “in” and “trotyl” (trinitrotoluene, TNT), meaning “To be inside dynamite”. The band performed its first shows in 2010, with a little set of four original songs and three cover versions (Bolt Thrower’s “Cenopath”, Hypocrisy’s “Killin’ Art” and Napalm Death’s “Unnecessary Evil”).

The word quickly spread out about the Mexican girls giving dynamite-fuelled gigs and soon Introtyl was opening for international bands such as Severe Torture, Cattle Decapitation, Unleash The Archers, or Suffocation.

Three EPs were released between 2013 and 2017, while the band reinforced their stage assault and made some line-up adjustments.

Finally, in 2018, their debut album “Creation Of Insanity” was released and Introtyl exploded on the other side of the border, in the US, and also in Canada, where they toured in the Winter while reinforcing their status in Mexico as one of the most refreshing death metal bands in the scene.

2019 was almost exclusively spent touring in all states in Mexico and playing the biggest metal festivals in their home country. And then pandemics rose its ugly head.

Not a band to sit on their asses for too long, the girls soon started to schedule online festivals’ appearances, while writing and recording their second album, “Adfectus”, for which they signed a record deal with Emanzipation.