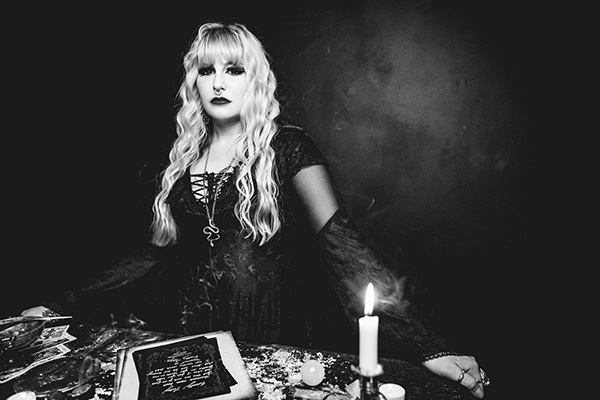 San Francisco-based melodic doom/symphonic metal artist IVA TORIC has revealed a new single–a striking cover version of Tori Amos‘ “Crucify“–in advance of her upcoming debut album THE DEVIL’S MARK due out later this year. Alongside the single, IVA has shared a music video that takes listeners behind the scenes of the recording process with producer Jim Kaufman and guest musicians Gregg Cash (Josh Todd and the Conflict, ex-Dorothy) on bass, Kemble Walters (Juliette & The Licks, Aeges) on guitars, Dylan Howard (Aeges) on drums and Sasha Smith on keys. Directed and edited by Matt Akana-who also designed the above cover art–the video can be seen streaming below or via YouTube here.

“I’m excited to honor Tori Amos with this cover,” shares IVA, “and to give my listeners a preview of what’s to come on my debut album ‘The Devil’s Mark.'”

“Crucify” is available now across all digital platforms at https://ffm.to/crucify

IVA uses her music to overcome personal challenges with mental health and relate to those who share the same issues while nurturing her connection to nature by using dark, mysterious elements and pagan aesthetics across her imagery. IVA‘s debut single “Dark Side of Me was premiered in January via KERRANG who described her sound as a “syncretic approach to dark culture, mixing the organic darkness of Uada, the psychedelic hues of Soundgarden, and the goth elegance of Maria Brink.” In April, she revealed her second “explosive and melancholy” (Ghost Cult Magazine) track “Actions Speak Louder“ followed by her last single, “Finally Today” which premiered via Metal Injection in May.