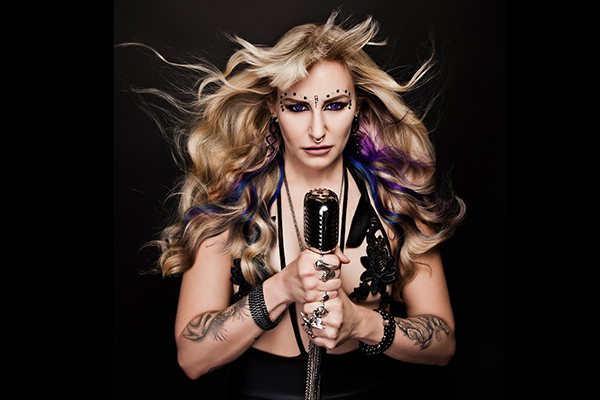 Melodic doom rock singer-songwriter-artist IVA TORICis excited to unleash her debut album The Devil’s Mark today, October 30. Produced by Jim Kaufman (Danny Worsnop, Them Evils), its 14 tracks combine doom-laden riffs and dark folk melodies with lyrical and visual nods to various aspects of modern paganism and witchcraft. Adjacent to the release—and just in time for Halloween—IVA has also issued an evocative music video for its fifth single, “Goodbye,” which visually reflects IVA’s lifelong struggle with mental health issues and depression. It was premiered yesterday, October 29, via FolkNRock who declared that the “thought-provoking piece perfectly balances the subject’s seriousness while giving a musically pleasant listening experience of angelic vocals and heavy soundscapes.” Watch it streaming below or on YouTube HERE.

“I was inspired to write this song after learning some heartbreaking details about the tragic suicide of a thirteen-year-old boy,” shares IVA. “We have a mental health crisis in the United States. There is still a stigma against mental health conditions and treatment is rarely affordable if it is available at all. I have personally been impacted by suicides of loved ones and have suffered with suicidal thoughts myself. This song is my reflection on this darkness.”

The Devil’s Mark is available now across all digital platforms HERE. Limited copies of the album on 2LP gatefold vinyl are also available including bundle options with an exclusive branded t-shirt and a sticker featuring the cover artwork (seen above). Get yours now directly from IVA’s webstore at www.ivatoric.com/shop.

IVA unveiled the album’s debut single “Dark Side of Me” in January 2020 with an exclusive music video premiere via KERRANG! who lauded her “syncretic approach to dark culture, mixing the organic darkness of Uada, the psychedelic hues of Soundgarden, and the goth elegance of Maria Brink.” She continued to release two more original tracks “Actions Speak Louder” (premiered via Ghost Cult Magazine) and “Finally Today” (premiered via Metal Injection) as well as a dynamic cover of Tori Amos’ “Crucify.”

“’The Devil’s Mark’ was born out of curiosity and exploring what I didn’t know was possible,” says IVA. “It’s my debut solo album after working in other bands and playing music non-professionally for many years. I wanted to see what I could create and how my art would impact others. I was hesitant to release this music into an uncertain world amidst a pandemic, environmental disasters, and social unrest, but now more than ever we need music to bring us together and soothe our souls. I have hope for the future–uncertain though it may be–and I hope ‘The Devil’s Mark’ finds its place in your hearts amidst the chaos.”