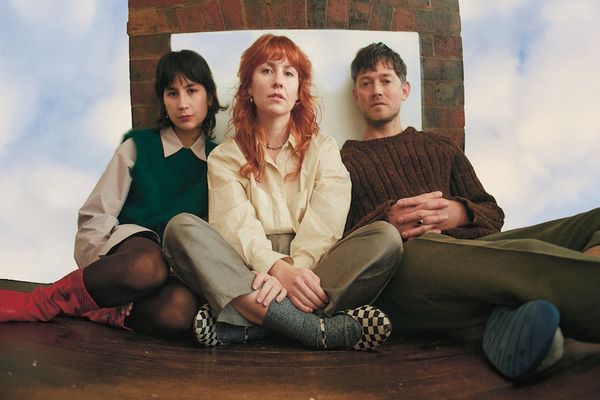 On the video, Jade McInally of Jade Imagine said “It’s taken me a really long time to unlearn the notion that to make art that’s worth anything you need to suffer or be really tortured in one way or another. I think it’s a side effect of growing up in the 90s being surrounded by all the idols I had like Kurt Cobain, Elliot Smith, etc… ‘The Instinct That I Wanna Know’ film clip is an ode to art being fun and intuitive. I had the best time filming it. It was about the feeling and process just as much as the end result, and that is something I’m super proud of because that’s how I wanna live this life.”

Director Hugo Kohler said ‘When I first heard the chorus of the song, I felt the clip needed to have a kind of ‘rotating’ feeling. So I decided to try and physicalise this idea by making a camera rig that literally spins. My first thought was to modify an apple corer for a Super 8 camera, and that’s what we did! It gives a kind of spin-y and dizzy feeling but I think it works well in moderation.”

Watch & listen to “Instinct That I Wanna Know” here:

Cold Memory is the sophomore album from Jade Imagine. Written and recorded between Melbourne, Warrnambool and Fremantle, Western Australia, Cold Memory offers ten songs that explore notions of connection – to self, to nature, and to others. Jade Imagine are Tim Harvey, Madeline Lo-Booth and Jade McInally with Marcel Tussie (Stella Donnely, Rolling Blackouts C.F) on drum duties for the recording. Together, the band offer a stunningly diverse collection of modern classics, blending the familiar with the fresh.

The writing process for Cold Memory began in early 2020, when the band returned home to Melbourne, Australia after an international tour with Australian psych outfit POND. After a period of intense work and travel, McInally was forced to slow down and make careful decisions around where her energy was best placed, to try and keep things simple and manageable.

Ironically, the production of Cold Memory was anything but simple – on a writer’s retreat away, for example, McInally’s bedroom was overtaken by a family of bats – and then came the global pandemic. Moving through these sudden and almost cinematic complications forced the band to simplify, and in doing so, allowed them to craft an essential, intimate portrait of connection.

Cold Memory, the album’s title track, offers a peek into life’s most visceral moments. It was written by McInally following a frigid mid-winter swim with friends in the salty waters of Victorian coastal town Killarney. The track perfectly moves between rhythmic, slightly uneasy verses before it explodes into a synth heavy, pop-y chorus – lush and evocative. As Cold Memory progresses, we find love songs to friends, rich with intensity and sentiment.

Album closer Lines was written intimately, jammed out by the band in a living room – the fireplace in the corner. On Cold Memory, it is clear that there is strength in simplicity.

Before founding Jade Imagine, front-person and key songwriter Jade McInally had been a stalwart of the indie scene for more than a decade. After winding her way to Melbourne from somewhere consistently sunny, McInally cut her live-performer teeth with her own electronic project Tantrums, before playing in the bands of local favourites Jess Cornelius (Teeth and Tongue) and Jess Ribeiro.

After signing with Milk! Records, Jade Imagine’s debut EP ‘What the Fuck Was I Thinking’ was released in April 2017. Rolling Stone Australia described the lo-fi gem ‘Stay Awake’, one of the EP’s singles, as “a shimmering summer-invite track”, its lowkey, lethargic, insomniac energy perfect for an impossibly hot afternoon.

Following the release of the EP, Jade Imagine secured numerous incredible support slots, including shows with 80s royalty The Pretenders (UK), Angel Olsen (US), Benjamin Booker (US), Alvvays (US), Lucy Dacus (US), Stella Donnelly, Julia Jacklin and Phantastic Ferniture. In March 2018 the band travelled to the US to showcase at the prestigious SXSW music conference in Austin, as well as playing key shows in Los Angeles and New York City. The band have toured the UK with Julia Jacklin (2018) and Pond (2019).

Jade Imagine released their debut album ‘Basic Love’ in August 2019, released on Courtney Barnett’s Milk! Records AU/NZ and Marathon Artists for Rest of World. Basic Love received Album Of The Week on Triple R Radio (VIC), The Edge Radio (TAS), and Radio Adelaide (SA), received glowing reviews from The Australian to The Big Issue, and is long-listed for the prestigious AMP Album prize.