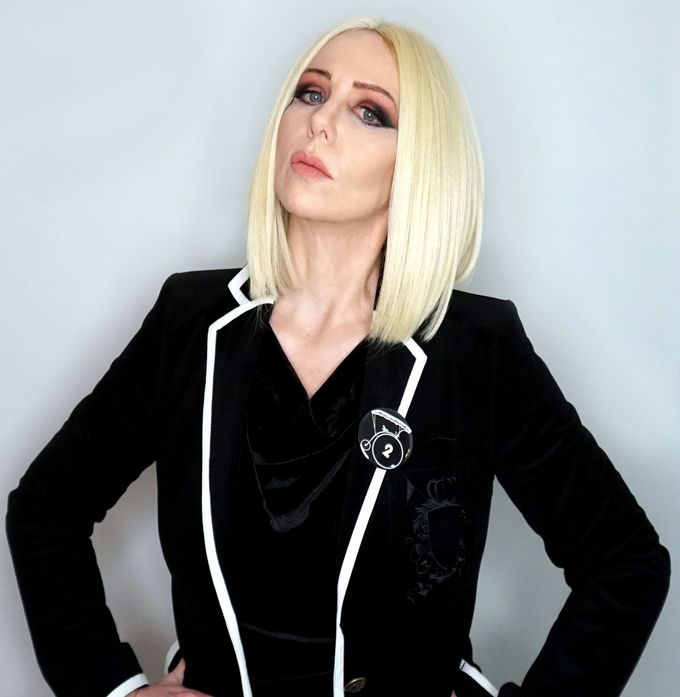 “Vix sounds perpetually enraptured. And the Rhode Island multi-instrumentalist has reason to be. Her music; clear, simple melodies awash in echo, is all dreaminess and shuddering. Catchy but otherwordly.“
– Rolling Stone

“Tuneful, haunting, melodic, catchy and reminiscent in the best possible way of what I loved in the early ’80’s.” – Popdose

“Jenn Vix’s electronic rock and its dark and cinematic undertones… are full of atmosphere and musical hooks. Tenebrous melodies arise from the shadows and the seduction and destruction of the listener is complete with the entrance of Jenn’s irresistible vocals. – The Noise

Premieres Eerie Music Video For “Rover” via The Big Takeover

Electronic-rock singer JENN VIX has premiered the brand new, eerie music video for her song “Rover” today via seminal music magazine The Big Takeover. The track is taken from her new EP 6, which was released earlier this year via Umbrella Music Co. Being a massive fan of the 1967 TV show The Prisoner featuring the late Patrick McGoohan, Jenn made this video as a tribute, recreating its scenery and style. “The clothing, umbrellas, and ocean scenery were easy to come across; I have family members who live in Newport, RI, so I stayed with them while filming, and I used the location for all of the outdoor shots,” says Jenn about the filming of the video. “The interior set was a bit more difficult, but I managed to somewhat recreate Number 2’s lair to the best of my ability with the budget I had available. I purchased some telephone handsets that were the exact shape of the ones used in the series, and I spray painted them to match its look almost identically.“

She elaborates further by noting, “The Eero Aarnio Ball Chair was custom made in black and royal blue just for this video shoot. It is a replica of Number 2’s chair, and I still have it and love it! The Rover ball which chases Number 6 is actually a large weather balloon which used in the original series.” The video is a perfect fit for the song itself, which Rock N Roll Fables calls “an ominous warning of mind police on your tail as it drones on and serves to highlight Vix’s sultry voice.“

“This track means a lot to me because I grew up watching the program in syndication, and the messages of independent thinking struck a chord with me. It wasn’t just a visually stunning program; Number 6’s struggle completely reminds me of my struggle of being an outsider who does not blindly accept mediocrity and mind control“, says Jenn about the song itself.

She continues, “What is most remarkable to me is that the series still makes sense in this day and age. We’re currently dealing with massive amounts of propaganda online as well as invasion of privacy and hive-mind… collective thinking. He didn’t just want to escape from the village where he was held captive for resigning from his position as a secret agent. He fought to maintain his own mind, and personality when everyone around him was conforming without questioning why they conform. The concept drew me in and made me think about a lot of things. I think that [actor] Patrick McGoohan was a genius and he was also an intensely private person off camera. I will always respect and admire his brilliance.“

As an impactful and successful multi-instrumentalist with production chops to boot, Vix’s career spans decades and boasts collaborations with such luminaries as Adam Horovitz of The Beastie Boys, Reeves Gabrels (The Cure, Tin Machine with David Bowie), John Ashton (Psychedelic Furs), Marco Pirroni (The Models, Adam and the Ants, Rema Rema), Dirk Ivens (Klinik, Dive), and the late Andy Anderson (The Cure, Edwyn Collins, Iggy Pop). On her latest 6, she jammed in the studio with Paul LF on bass and drummer Dave Barbarossa (formerly of Adam and the Ants and Bow Wow Wow).

6 is an adventurous and deeply personal journey through the electropop genre, featuring bombastic dance jams such as “Rover,” and lead single “Ride,” as well as slower and more haunting tracks such as “The Mask of Charon.” The EP finally cascades into the driving crystalline instrumental outro, “Valentine,” which serves as a showcase for Jenn’s production talents.