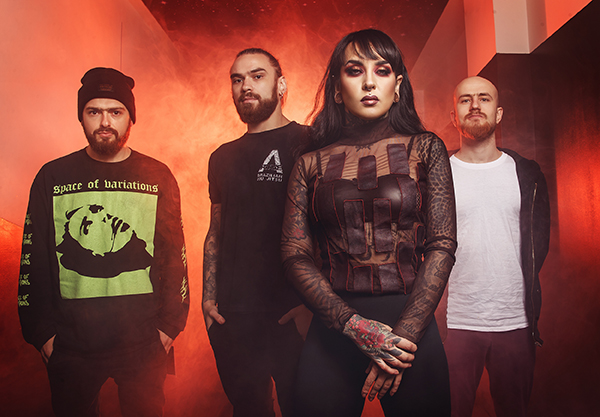 Ukraine’s progressive groove metal frontrunners JINJER have finally released their very first official live album, Alive In Melbourne, today via Napalm Records. The album shows JINJER at what they do best: smashing crowds to bits like very few bands can. Recorded on March 5th 2020 on the Australian leg of their highly successful Macro World Tour, the show was one of the last performances for JINJER, as well as the rest if the world due to the Covid-19 pandemic. Alive In Melbourne features 17 of JINJER‘s heaviest hitting tracks including “I Speak Astronomy”, “Noah”, “Pit of Consciousness”, “Words of Wisdom” and their breakthrough single “Pisces”.

As an added bonus and a surprise to their fans, not only can you listen to Alive In Melbourne in its entirety on all streaming platforms, but together with Napalm Records, JINJER will also premiere the complete Alive In Melbourne concert video on YouTube FOR FREE! Tune in to the Napalm Records YouTube Channel at 11:00 AM PST/2:00 PM EST TODAY and experience the energy that JINJER deliver live and up close in your own living room.

Alive In Melbourne is not only a live album but a very personal project of JINJER‘s enigmatic and outspoken bassist Eugene: “When this idea first came about, never could I imagine that it would grow into the project that it has become. First it was supposed to be a single video or maybe 1 or 2 more, then it was meant to be an online concert video for Knotfest.com …. and now, after 6 months of planning, reacting and fighting to get this little piece of heavy metal history out to our fans and friends: Alive In Melbourne is out! From picking the cover artist Gabriel Nicoletti, to writing the very intense and personal band history in the linear notes … this album was not only something that I felt that our fans deserved in these strange times but it also helped me get through some of my own darkest times during the first Covid-19 lockdown. This was a moment in time that none of us will forget anytime soon.”

As one of the hardest working and most innovative bands in the business, JINJER wouldn’t be JINJER if they didn’t play any of the many aces up their sleeves in a situation and climate as harsh as this. After the announcement of the live album, the band made the impossible a reality and, as the first non-European outfit, set foot on stage again in September, bringing back their intense live shows to their longing fans in Germany and Switzerland – under all necessary precautions.