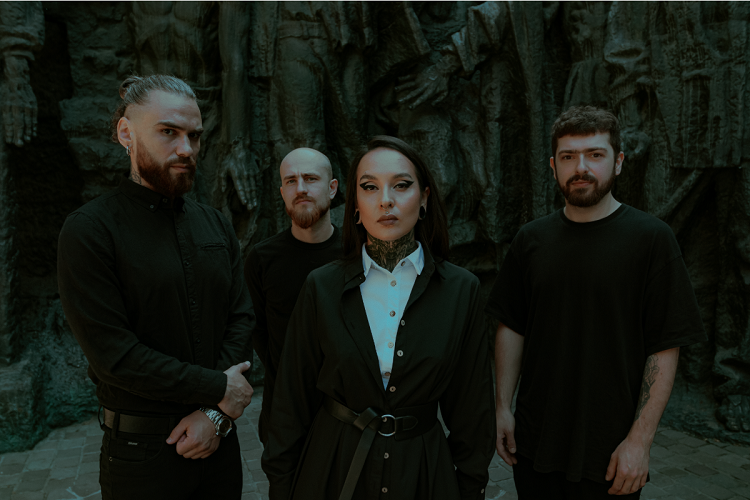 This past summer, progressive metal giants JINJER released their most in-demand and successful album yet, Wallflowers, subsequently hitting the top of the charts all around the globe.

Then just last week, JINJER reached yet another milestone – joining the first leg of the 2022 Knotfest Roadshow in North America to support metal legends Slipknot with fellow special guests In This Moment.

The first leg of the tour kicks off in Fargo, ND on March 16 and hits an additional 17 cities before wrapping up in Vancouver, BC on April 17. Tickets are on sale now!

Today, JINJER is thrilled to announce new headline dates surrounding their Knotfest Roadshow run. New stops have been added in markets such as St. Louis, MO, Boise, ID, Indianapolis, IN and many more.

Tickets go on sale this Thursday at 10:00 AM Eastern time – see below for all dates!

“20 years ago or so, Slipknot shocked the world, along with four Ukrainian kids who would later become JINJER!

There was nobody like them before. This band proved that you don’t need to go pop radio to get big. Their sound revolutionized heavy music. Joey’s drumming changed the game!

Thomson and Root’s riffs are what we learned to play the guitar with. In many ways, Slipknot became role models to us, and we followed in their footsteps.

For this reason and many more, now being able to tour with this monster of a band means so much to us! We cannot wait to get out there on Knotfest Roadshow 2022. See you there.”

In other big news, JINJER has a special treat for die-hard fans in the form of a new, limited edition glow-in-the-dark vinyl collection!

Each of the band’s most renowned releases – Cloud Factory, King Of Everything, Micro, Macro and Wallflowers – will be available on April 1, 2022 in this special variant, limited to 500 copies per title.

This is no April Fools joke – get your copies now before they’re gone!  Pre-Order Your Glow In The Dark JINJER Vinyl HERE.

Get Your Copy of JINJER’s Latest Album, Wallflowers, HERE.

You can find more formats and specials, as well as new merch in the JINJER merch shop HERE!

JINJER‘s exceptional precision of modern metal paired with tough as nails attitude has earned them a fiercely loyal, rabid fanbase and massive critical acclaim, making JINJER one of the most talked about bands today and garnering them many sold-out performances across the globe.

Since announcing Wallflowers, the band has graced numerous renowned international magazine covers, booked the biggest stories, sold out countless tour dates and their first two new singles, “Vortex” and “Mediator”, both cracked the multi-million stream mark in no time.

The new album not only presents a methodical and premeditated next step in the band’s already imposing career, but moreover, it mirrors the personal adversities they’ve faced due to the worldwide events of the last year.

Wallflowers is not only an upgrade to the progressive groove metal sound that all JINJER fans crave, but also a sonic pressure cooker of technical musicianship, emotional fury and an intense soundtrack befitting the harrowing state of the world today.

Hailing from the conflict-ridden Ukrainian region of Donetsk but now calling Kiev their home base, JINJER truly do not mince words – or riffs – on Wallflowers.

Dive into the exceptional sonic universe of JINJER and re-watch all videos from Wallflowers: