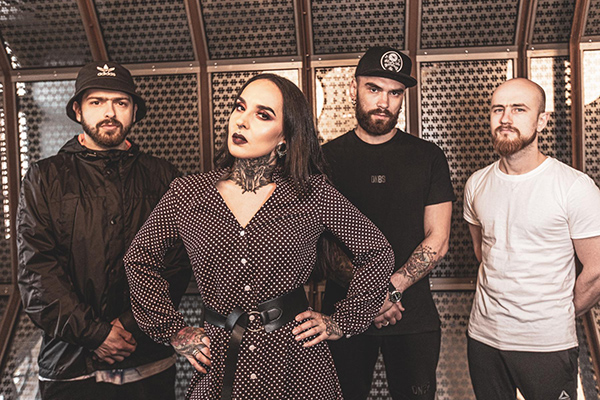 JINJER – new album in the charts

It’s finally here, and transgresses borders of all imagination! Ukrainian modern metal giants JINJER have only just released one of the most anticipated metal albums of the year on August 27, entitled Wallflowers, and are already breaking the charts worldwide with the game-changing fourth offering. Wallflowers, the successor of their critically acclaimed third album Macro, is currently ranked at #7 on the German charts – marking their highest position in Germany so far – in addition to entering at #5 on the official UK Rock & Metal Album Charts. Plus, the band entered both the US Billboard Top New Artist Albums chart and Canada’s Hard Music Albums chart at #1, in addition to landing at #2 on the US Current Hard Music Albums chart and scoring several other top positions. Wallflowers has also gone on to gather numerous top spots in several other international territories. See all chart entries of this modern metal manifestation below.

Eugene on the new album:
“Growing creatively has always been a major goal for us. The day JINJER stops reaching for new musical horizons will be our last day as a band. We could have churned out what our peers expected us to do, or produce ‘Pisces’ clones without end, but we’ve never done that and we never will. Instead, we wrote an album whose level of emotions range from the fiercest aggression we’ve ever had, to the most intricate melodies and melancholic vibes you could ever get from our music. We decided to rip apart all possible stylistic boundaries without regard to financial success or competing with our previous albums. Wallflowers is a different kind of album musically and visually. It’s about our identity as a band, as individuals and a clear statement that we are different from most artists… and that it is OK to do your own thing.”

Get your copy of Wallflowers NOW:

You can find more formats and specials, as well as new merch in the
JINJER merch shop HERE!

Since announcing Wallflowers, the band has graced numerous renowned international magazine covers, booked the biggest stories, sold out countless tour dates and their first two new singles, “Vortex” and “Mediator”, both cracked the multi-million stream mark in no time. The new album not only presents a methodical and premeditated next step in the band’s already imposing career, but moreover, it mirrors the personal adversities they’ve faced due to the worldwide events of the last year. Wallflowers is not only an upgrade to the progressive groove metal sound that all JINJER fans crave, but also a sonic pressure cooker of technical musicianship, emotional fury and an intense soundtrack befitting the harrowing state of the world today. Hailing from the conflict-ridden Ukrainian region of Donetsk but now calling Kiev their home base, JINJER truly do not mince words – or riffs – on Wallflowers.

Catch JINJER 2021 live on tour all over Europe!

JINJER‘s exceptional precision of modern metal paired with tough as nails attitude has earned them a fiercely loyal, rabid fanbase and massive critical acclaim, making JINJER one of the most talked about bands today and garnering them many sold out performances across the globe. Driven by their unmatched work ethic, as soon as they were able, JINJER took to the road in Europe to perform safely and adhering to strict local regulations, providing diehard fans with a much needed oasis during lockdown. In early 2021, as society reached for a light at the end of the tunnel, the band moved forward, announcing plans for international fall 2021 headline tour dates that, within weeks of announcement, already began to sell out. In support of their masterful latest full-length album, Wallflowers, JINJER have just announced additional dates for their EU tour, starting September 16th, supported by French metalists Hypno5e and Ukrainian Metalcore unit Space Of Variations.

Dive into the exceptional sonic universe of JINJER and re-watch all
videos from Wallflowers: