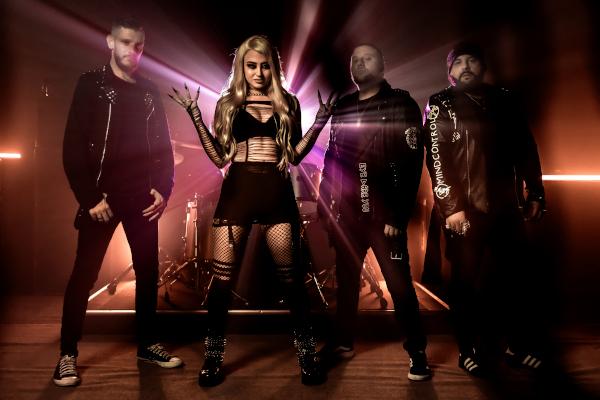 KALEIDO unleash their combustible and catchy signature blend of hard rock, pop punk and alternative music with a biting new single “Run” due this Friday, May 27 across digital platforms.

The 2x Detroit Music Award-winning band have revealed a horror-movie inspired music video for the track which was premiered yesterday (5/25) via Metal Injection who described it as “catchy-as-hell” and lauded its “pretty huge” chorus.

Watch the “Run” music video, directed by Tom Flynn (Lamb of God, All That Remains, Body Count), now via YouTube or streaming below. Pre-save/add “Run” on your preferred streaming platform here: https://lnk.to/KaleidoRun.

To go along with the video’s haunting theme, KALEIDO shared a list of their “Top 10 Favorite Songs From Horror Movies” which can be found below.

“Every step of the process, from beginning to end, in creating the song and music video has been exhilarating,” shares unabashed frontwoman Christina Chriss.

“From the moment we began writing ‘Run,’ riding high off the energy from just completing three months on the road touring, we knew there was something special and captivating about the song. We’re huge fans of all things horror and spooky, so we were in our element making the music video and it allowed us to bring our love of that world to life.”

KALEIDO—Chriss (vocals), Joey Fava (drums), Cody Morales (bass) and Drew Johnston (guitar)–will perform “Run” for the first time to hometown audiences this weekend with two shows: Friday, May 27 at Diesel Concert Theatre in Chesterfield, MI and Saturday, May 28 at The Music Factory in Battle Creek, MI.

The band were last seen touring in fall and winter of last year as direct support for Sebastian Bach, who handpicked them after discovering them via YouTube.

Previously the band has shared the stage with acts ranging from Aerosmith, Slash and Kid Rock to Butcher Babies, Halestorm, Twenty One Pilots and Rob Zombie in addition to appearances at Kiss Kruise Shiprocked!, SUMMERFEST and more.

KALEIDO shared a deluxe edition of their critically acclaimed breakthrough album EXPERIENCE in 2020 which debuted at #11 on Soundscan s “Top New Artists Albums” chart and earned the band various TV placements including promo spots for the MLB team, Pittsburgh Pirates. Its hit single “Die Tryin’” peaked at #22 on Billboard’s “Rock Indicator” charts and reeled in over 200k streams.