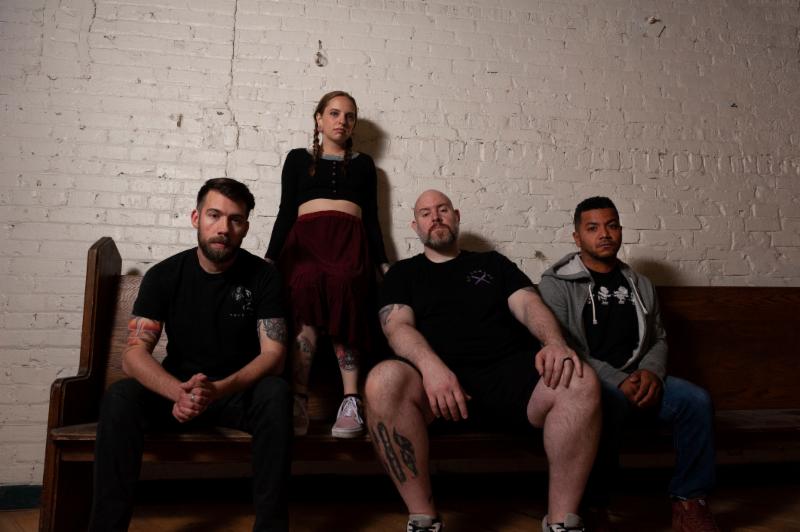 “It’s the kind of dark, heavy hardcore that should appeal to fans of Converge and Integrity, and KNAAVES do a good job of putting their own twist on this sound, especially thanks to Andy Parmann’s and Amanda Daniels’ piercing dual vocals.” — BrooklynVegan

Stream / Share KNAAVES’ “Weight Of The Crown” At THIS LOCATION

The Serpent’s Root is the impending debut full-length from Milwaukee-based metallic hardcore unit KNAAVES, set for release next month via Confluence Records.

In advance of its release, BrooklynVegan is pleased to offer up “Weight Of The Crown” for public feasting. Notes the band of the track, “‘Weight Of The Crown’ was the last song we wrote for the album and its lyrical content is about the struggle of leaving something or someone you love because of things out of your control. There is always a period of mourning when loss is experienced, but it can also be the catalyst to positive transformation.”

Adds BrooklynVegan, “It’s the kind of dark, heavy hardcore that should appeal to fans of Converge and Integrity, and KNAAVES do a good job of putting their own twist on this sound, especially thanks to Andy Parmann’s and Amanda Daniels’ piercing dual vocals.”

Stream “Weight Of The Crown,” courtesy of BrooklynVegan, at THIS LOCATION.

The Serpent’s Root will be released September 3rd on CD, digital, and cassette formats. For preorder bundles, and to stream the title track, visit the KNAAVES Bandcamp page at https://knaaves.bandcamp.com/album/the-serpents-root.

Surrounded by deceit and destruction – lies from the media, corruption of our planet, and even our own minds shifting thoughts within – each day is a war upon our senses as we struggle to sort out the truth in an age of disinformation. The music of KNAAVES is inspired by the often-palpable negative energy that surrounds us. Some songs are drawn from the media’s manipulation and sensationalism of cults, serial killers, and murders, while others are drawn from anxiety, depression, abuse, neglect, or the relentless destruction of our planet’s resources.

KNAAVES will play a special hometown record release show on September 13th as well as a show in Chicago with Venom Prison, Homewrecker, and Call Of The Void on September 22nd with additional performances to be announced in the weeks to come. See all confirmed dates below.