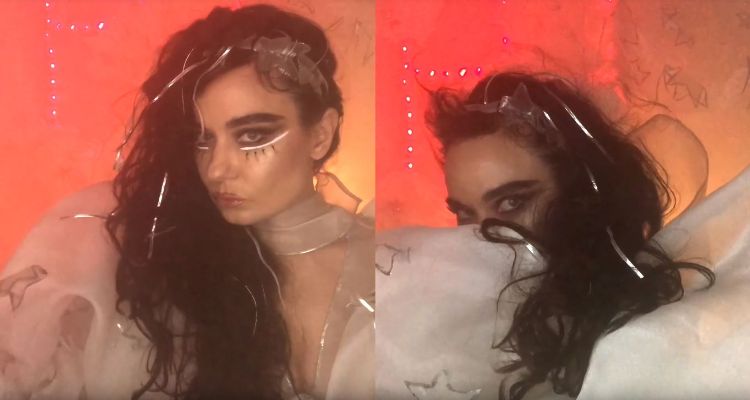 Taking on the shooting, editing, performing, and costume design all by herself, Kristeen creates a jolting visual that augments the song’s panache. She explains exclusively to BlackBook, “I was trying to echo the music with the visuals, the dreamy / airy meets fire and static. The rising above / floating meets falling down. I made the set and, obviously, the outfit in the dreamy section. I really don’t know why I made the visual choices I made. I can’t answer that. I saw it completely in my head first and I have no reason for any of it. Maybe it’s something underneath that wanted to scream out and it’s in that language.“

Described by BlackBook as an “unmissable live performer,” Kristeenyoung will also be kicking off a string of performance residencies this fall: in NYC (September 4th, 11th, and 18th at Berlin in the East Village), Los Angeles (every Monday this October at The Satellite), and San Francisco (October 9th, 16th, and 23rd at The DNA Lounge). She will also be heading overseas to London to play shows on November 6th (at Paper Dress Vintage), November 13th (at The Victoria), and November 20th (at St. Paneras Old Church)

Kristeen started out in music with the goal of showing how powerful and dangerous a piano can be. This resulted in her 1997 debut album Meet Miss Young and Her All Boy Band. In the early 2000s she began working with Grammy award-winning producer Tony Visconti (David Bowie, T.Rex, The Damned) starting with her 2003 record Breasticles, which featured a duet with the late David Bowie himself, “Saviour”. On 2004’s X, the opening track “No Other God” was a duet with Brian Molko of Placebo. On her 2009 record Music For Strippers, Hookers, And The Odd Onlooker, she collaborated with Patrick Stump of Fall Out Boy on the track “That’s What It Takes, Dear.” She also performed on The Late Late Show with Craig Ferguson in 2014 with Dave Grohl and Pat Smear of Foo Fighters fame as her backing band.
The SubSet marks the first time that Kristeen has fully self-produced a record on her own. “It was important to do this one by myself,” she explains. “Even though I have co-produced most of my albums before, people will still ‘forget’ to include my name when they are talking about who produced the albums. And I think it’s because the other co-producer was male and famous. I thought I would take that option of a mistake out of the equation for people.”

With this ninth album, Kristeen invites listeners to come along on her most experimental and emotional journey yet. Her energetic blend of hard-hitting instrumentals, operatic vocals, and raw, incendiary lyrics gives her music a theatrical flair that helps elevate its urgency. In Kristeen’s words, “I hope people can get lost in it and really have an experience.”

The SubSet will be released independently on September 4, 2019.