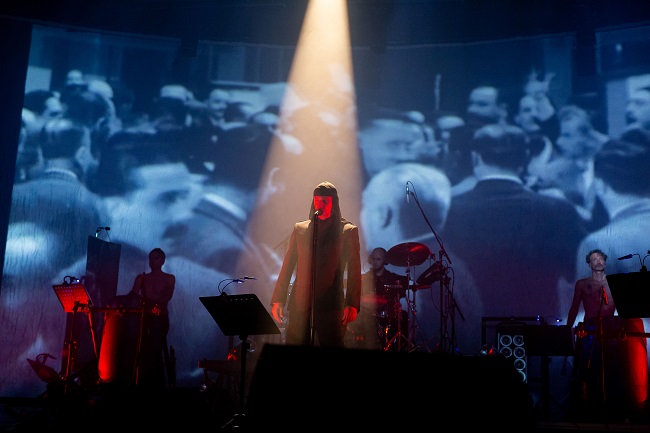 LISTEN TO A TRACK HERE

LAIBACH today announce details of a new album, Wir sind das Volk (Ein Musical aus Deutschland), out March 25 on Mute. The record will be available on digital platforms as well as a deluxe CD format with extensive sleeve notes. A double vinyl edition will follow on June 10.

The album collates music from the acclaimed theatrical production Wir sind das Volk (“We are the People”), which premiered at Hebbel am Ufer (HAU) theater in Berlin on February 8, 2020.

Two more shows were performed before the production was halted due to the pandemic. In 2021 Laibach opened the Klagenfurt Festival with a Slovenian version of the same production and performed two more sold out shows at Ljubljana’s Kino Šiška.

Performances will resume in March at Berlin’s HAU with more confirmed for Zagreb, Ljubljana, Hamburg, Maribor and in the Cultural Capital of Europe, Novi Sad. Full details below.

Wir sind das Volk is based upon the writings of Heiner Müller (1929-1995), one of the most significant German-speaking playwrights since Brecht.

Laibach’s own association with the theater began in 1984 when they composed music for Heiner Müller’s Quartet, a play that was presented at the Slovenian National Theatre in Ljubljana. The following year they met Müller in Berlin who suggested that they collaborate.

Müller went on to use Laibach’s music in a production, but the collaboration never happened until the head of the International Heiner Müller Society, Anja Quickert, proposed a posthumous project based on Müller’s texts.

“We followed Heiner Müller’s own strategy of cutting and rearranging the material, taking his text and putting it into another context, rebooting it with music, in order to drag the audience into it or alienate them from it. Music unlocks the emotions and is therefore a great manipulative tool and a powerful propagandistic weapon. And that’s why a combination of Heiner Müller, who saw theatre as a political institution, and Laibach, can be nothing else but a musical.”

The album’s artwork and inner sleeve is Epiphany II: Adoration of the Shepherds (1998, collection of Fine Arts Museums of San Francisco) and Epiphany I: Adoration of the Magi (1996, Denver Art Museum collection) by the renowned Austrian-Irish artist, Gottfried Helnwein. Taken from his Epiphany series – some of his most recognizable works – the painting reflects on two of the central themes of his work: childhood and National Socialism.

Laibach has a knack for precision timing and Wir sind das Volk is no exception. The term “volk” (nation, or people) has undergone profound changes since 1989’s chants of “we are the people” at the time of the fall of the Berlin Wall. Throughout Europe and America the word has in recent years become a tool of nationalist and racist exclusion.

Quickert goes on to say, “This project finally brings together what should have happened a long time ago: Laibach and the German playwright and poet Heiner Müller together. The myth of the nation cannot be buried as long as ghosts undermine its foundation. ‘Dialogue with the dead must not be interrupted until it is revealed which part of the future was buried with them.’ Welcome to the abyss of the nation!”

Laibach formed in the then-Yugoslavian industrial town of Trbovlje. Founded in the year that the country’s founding father Tito died, the band rose to fame to become one of the most internationally acclaimed bands to have come out of the former Communist countries of Eastern and Central Europe.

They recently becoming one of the first bands to perform in North Korea. In 2019 they released a Laibachian interpretation of The Sound of Music, conceived during their trip to North Korea. In 2020 Laibach celebrated four decades with Laibach Revisited.