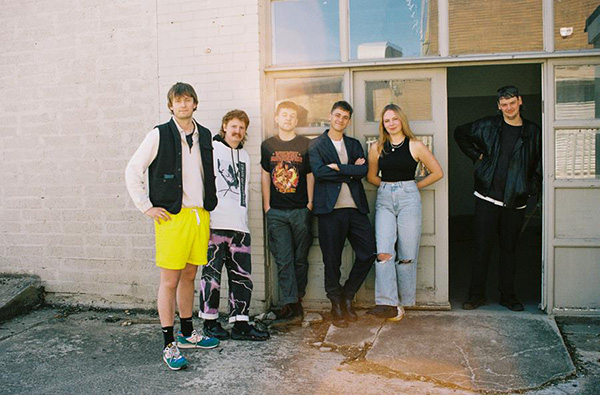 DEBUT EP “PSYCHOBABBLE” OUT 10TH SEPTEMBER VIA
SO YOUNG RECORDS

“the dream is alive.” – Loud & Quiet
“smart, brazen and irresistible all at the same time” – NME
“we would be lying if we said we weren’t 100% into it.” – DIY
“joyful in its sheer creative freedom.” – So Young
“a bona fide finger-snapper right from the off.” – The Line Of Best Fit

On “Williston, ND”, the band continue their sonic and thematic evolution, delving into more stark and direct instrumentation which sees them drawing on darker and more biting leftfield influences. Though their music continues to morph and challenge expectations, none of this comes at the expense of thrilling songwriting, which continues to tap into the band’s irresistible new-wave eccentricity and groove-driven riffing.

Speaking on the single, frontman Ben Jakes says: “I wrote this track after reading about this town in the USA. It used to be a very small town but has become the centre of a huge oil boom. I don’t really know why it interested me so much, I think I was trying to capture the pictures of the fracking equipment at night lit by neon lights on these sprawling prairies. It reminded me of ‘There Will Be Blood’ as well, but obviously in a modern setting.”

It’s often hard with Lazarus Kane to know where the line between sincerity and irony truly lies. They’ve been called everything from high-concept performance art to disco provocateurs, but it is perhaps this sense of uneasy mystery that sets them apart.

In an industry often plagued by a dour self-seriousness surrounding art and the creative process, Lazarus Kane emerged as a breath of fresh air in 2019 with their Speedy Wunderground single ‘Narcissus’, a strutting, rhythmic exploration into the superficiality of modern life.

They followed this up with the inescapable strut of ‘Night Walking’ in 2020, further blurring the expectations of what a band could, or should, do.

So where now in 2021, with the world on pause? For Ben Jakes, FKA as the eponymous Lazarus Kane, the answer was simple. Rip everything up and start again.

“It felt disingenuous to continue the character with the current state of the world” he says. “Instead, I wanted to really hold a mirror to the often darkly comedic and surreal ways in which we deal with difficult situations, especially within our often extremely comfortable, materially focused and self-absorbed lives”.

The result is “Psychobabble”, a wonderfully jarring collection of songs that continue to defy any kind of genre. Taking cues from early Brian Eno, no wave, 80’s hardcore and experimental electronic music, such as Biosphere and Cluster, the songs weave and transform in front of the listener with little to no indication of where they might go next, all whilst maintaining Jakes’ surreal sense of humour.

Alongside the new single and EP, Lazarus Kane have also recently announced their first-ever headline tour for October 2021, which will follow on from their tour with PVA and Folly Group in July and festival appearances including Wide Awake Festival and End Of The Road. Full dates are as follows:

“Psychobabble” marks a tantalising new chapter in the band’s discography, but perhaps even more exciting is not knowing what might be around the corner. As a group all in their mid 20’s, the internet is a playground of untapped influences, old and new, waiting to be deconstructed with the group’s signature wit and unbridled creativity.

For anyone asking, Lazarus Kane is alive and well.

Psychobabble
Out September 10th via So Young Records
Pre-order HERE