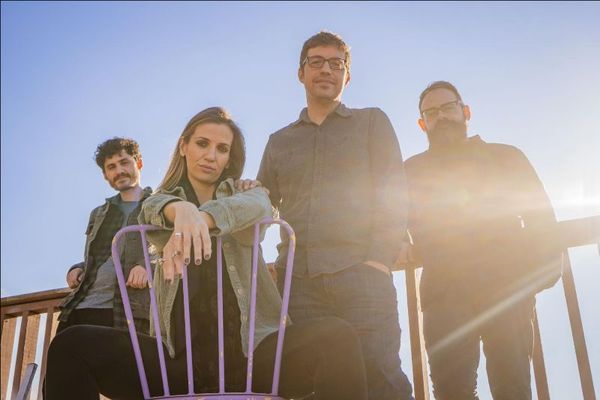 Today, the Brooklyn-based band Le Big Zero are thrilled to share their new single “Coda” and it’s accompanying video. The song acts as the third single from their upcoming album, A Proper Mess, set for release on April 8, 2022 via Know Hope Records out of Philadelphia.

Pre-order a physical copy or pre-save the album on your preferred streaming service HERE. “Coda” follows on the heels of the album’s singles “Horror Movie Pie Fight” and “Beach Séance“.

Vocalists Michael Pasuit and Carolina Aguilar continue their wry exploration of monotony and anxiety in the modern age, via a Frank Black-Kim Deal-esque sonic intertwining. The album is a reflective, messy love-letter to uncertainty and the choice to just press onward.

“Coda” itself is a reincarnation of an older song’s skeleton. The song was pieced together from a discarded track by Michael Pasuit’s  previous band X-Ray Press. Lyrically, the song is about the band breaking-up a la famous blow-ups like Fleetwood Mac, the Clash, or Oasis.

Speakingon the origins of the song, Pasuit writes:

“It was a song that we wrote earlier in our existence as a band, but never found a home on an album or even in a live set. Yet it always had such potential. Through the Le BIg Zero lens, we changed the meter from 7/8 to 4/4 at the start of the song so the vocal harmonies could take a more commanding presence.

The punkier middle section was written specifically for Le Big Zero as to ground it in the type of rock we do (as opposed to XRP’s aggressive, super-weird math rock approach).  We’d like to lay claim to that ending guitar riff, but it was written by X-Ray Press’ guitarist Paurl Walsh, currently a producer and sound engineer in Seattle.”

While speaking about the creative process behind the music video, director Jeanette D Moses writes:

“With “Coda” we were looking to create a live band concept that didn’t take place in a traditional venue and had a bit of a playful vibe. The creative process for the video was pretty collaborative with Michael and I sharing ideas back and forth before landing on the final concept of Le Big Zero playing their hearts out for an underwhelmed kid.

Ultimately we were looking for a way to showcase all the members of the band and their live energy, while also poking fun at the way an audience sometimes seems completely apathetic to the cool thing happening in front of them.”

Blending 90’s garage rock with complex, yet poppy song structures,Le Big Zero are taking a huge leap forward with their sophomore album A Proper Mess. The experimental indie quartet have Frankenstein’ed their iconic predecessors with the energy of early slacker grunge groups and the brains of math rock outfits.

The Brooklyn based group was originally founded by vocalist and guitarist, Michael Pasuit, and soon joined by vocalist Carolina Aguilar. Once merely dusty cassette-tape demos written in the aughts of a cheap Seattle apartment, Le Big Zero is now a fully fledged indie-rock manifestation come to life. The group presently features the stylings of Ben Ross (bass) and Lukas Hirsch (drums).

Le Big Zero’s debut 2019 LP Ollie Oxen Free wasn’t as much of a fleshed out album as it was a collection of songs previously written by Pasuit for other projects that never quite fit. However, Le Big Zero was always meant to metamorphe from its original cocoon.

Right before the pandemic hit, the band began recording. With a new collaborative effort, Le Big Zero began to fully transform. The result was the high energy, messy love-letter to uncertainty that is A Proper Mess.

With angular song structures and amenable harmonies, A Proper Mess is as unique as it is introspective. Now a complete collaborative effort, the group has really taken traditional indie rock and flipped it upside down.

Tracks like “Horror Movie Pie Fight” and “Beach Seance” feature a sense of absurdity and abstraction. With influences from Sleater-Kinney to Better Oblivion Community Center, there is a wholly unique aspect of A Proper Mess that can’t really be pinned down but offers an edge that can’t be chiseled down.

A Proper Mess will be released April 8, 2022 by Know Hope Records.