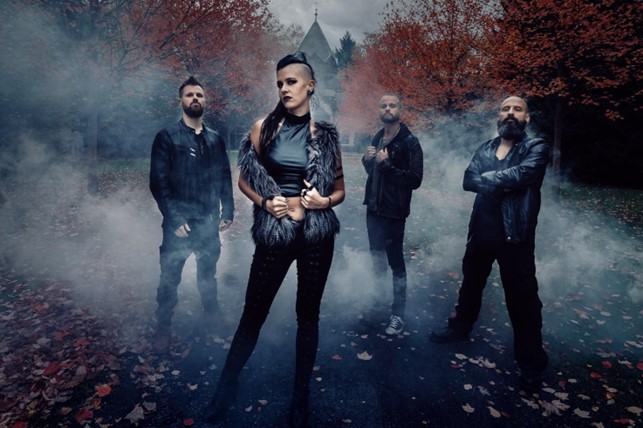 German modern metal upstarts LEAGUE OF DISTORTION have introduced an incredibly refreshing sound to the scene with the successful releases of fiery first singles “Wolf or Lamb” and “My Revenge”, proving the musical finesse and experience of lead members Anna “Ace” Brunner (Exit Eden) and Jim “Arro” Müller (Kissin’ Dynamite).

While the electrified third single “It Hurts So Good” recently added to their dangerous mood, the quartet goes all out by showing their most resilient side on final single “I’m A Bitch”, landing just before the release of their self-titled debut album this Friday, November 25 via Napalm Records.

The vibrant formation doesn’t make any compromises by offering a wild, energetic sound that doesn’t hide behind any norms. “I’m A Bitch” kicks off with hypnotizing rhythms, rising up to a grooving, hard-hitting soundscape while making an empowering statement with its music video.

LEAGUE OF DISTORTION on “I’m A Bitch”:
“This song is about social prejudice and inequality. Women and men are still being treated with different measures. With this provocative topic, song and music video, we are speaking up against this injustice, wanting to persuade you to reprogram the old patterns of thinking.”

Watch the official music video for “I’m A Bitch” HERE:

A new force, LEAGUE OF DISTORTION unites to defeat the shadows cast upon the music scene with their fresh sound and style!

Together, they’ve formed one of the hottest new modern metal bands of the year, combining their signature sounds to create a powerful soundscape. Now, they are ready to fight the darkness yet again with their 2022 full-length, the self-titled debut album, League of Distortion.

Lifting the dark veil of stagnation caused by the pandemic, LEAGUE OF DISTORTION introduces a new sound that resonates with the uncertainty of this period. “Wolf or Lamb” – the addictive first stand-alone single that introduced the band as a force to be reckoned with – ignites the fire of the full album.

“Rebel By Choice” and “The Bitter End” show the band’s burning passion and dedication to the genre, while “My Revenge” convinces with a catchy hook and bashing guitar riffs. The elemental force of Anna “Ace” Brunner’s distorted, powerful voice merged with chunky riffs played by Jim “Arro” Müller, steady and strong beats delivered by Tino “Aeon” Calmbach and edgy bass by Felix “Ax” Rehmann unifies them, forming a strong blast of an album that cannot be missed!

LEAGUE OF DISTORTION showcases the individual musical expertise of its members without ever becoming stagnant or pretentious – unabashedly distorting the order and launching a new age of metal. Catchy hooks like in “L.O.D.” mark anthems to claim their new reign. With songs like “Solitary Confinement” and “Sin”, the band shows their lyrical depth by turning their sadness into a powerful war cry, providing expressive pieces and hymns for the lost.

LEAGUE OF DISTORTION convinces with classic pieces featuring strong instrumentals, on-the-nose lyrics and energetic vocals, proving their penchant to stand out from the pack. They’ve transformed their frustration into a musical statement beyond comparison. With “Do You Really Think I Fucking Care”, the band lands the final punch of the album to make the message clear: LEAGUE OF DISTORTION are here to set the scene ablaze!

The band on their debut album:
“With this debut album, we lay the cornerstone of LEAGUE OF DISTORTION. Processing the cruel and capricious reality, with straight-forward, provocative and very personal topics, we are distorting perspective and creating tremendously powerful music. LEAGUE OF DISTORTION is here to stay and we welcome you to be a part of this from the very beginning.”

League of Distortion will be available in the following formats:
Digisleeve
1 LP Gatefold
Digital Album