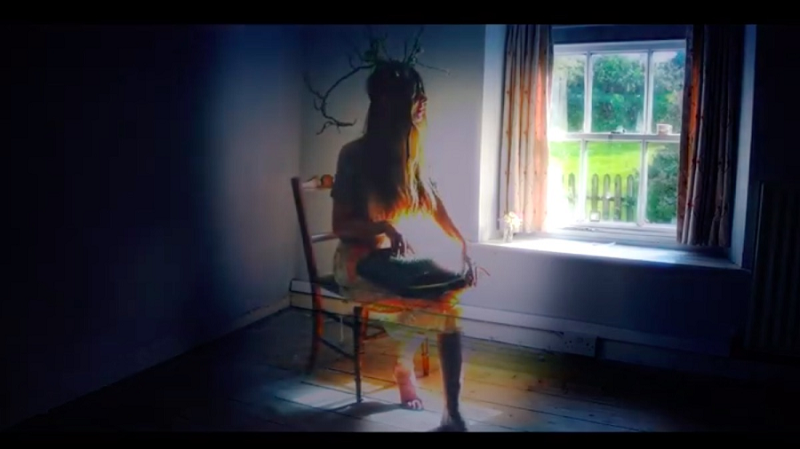 Today, duo Liar, Flower (KatieJane Garside of Daisy Chainsaw, QueenAdreena, Ruby Throat and Chris Whittingham) announce the release of their latest single, ‘i am sundress (she of infinite flowers)’ with an ethereal visual accompaniment, as well as a physical version of their recent album Geiger Counter, available from August 21st via One Little Independent Records as a 2xLP + CD deluxe edition as well asd standard CD release.

‘i am sundress (she of infinite flowers)’ is diaphanous, intimate folk; a sensory experience sonically and visually. Directed by Chris Whittingham, KatieJane performs with her autoharp in a dark empty room, contrasted by parallels of her younger self playing the instrument in an open field and threads of dream imagery. “Thank you for coming back to me,” sings KatieJane, “The badger is digging for bees, beloved cat slip in his shadow, so I can be free.”

KatieJane offers her explanation of the song:

can you feel this shift? there’s no stopping it now and liar, flower turns to face the sun and the autoharp gave her this song

so i can be free

‘i am sundress (she of infinite flowers)’ is a stark contrast to the duo’s first single, ‘My Brain Is Lit Like An Airport’ which was released in late April earlier this year, and showcases the range of Geiger Counter, which varies from raw, bewildering, venomous rock to gentle folk musings.

KatieJane said of the album:

i found her one day in a notebook, she spoke of a new chapter and the dropping away of tenure

she likes to make noise

this record was conceived and collected through a year of submersive meditation, trance and improvisation, insisted by my bird bones insisting, i went down deep into the soil, set alight corrupt files and malware, something needed routing out taking me ever deeper

the words are too big, they vanquish, swallow up, this is why

i use so many words to say ‘i will not speak’

i love you bright heart, i love you

as our daughter asks ‘how does the queen ant know she’s the queen?’

Garside and Whittingham have been living together on a small sailboat while raising their young daughter and have spent the past few years out at sea. In recent years the pair have lived a life of isolation, and the album reflects those experiences, coincidentally fitting for the current times. Chris said “We’re just a tiny, super-self-contained operation with not much outside contact. It’s been 14 years and all our records are played, recorded, mixed, mastered, art-worked, videoed, etc., solely by us, and in the end there’s probably little else to say beyond the recordings.

Liar, Flower is the reincarnation of Ruby Throat, consisting of artists KatieJane Garside (Daisy Chainsaw, QueenAdreena, Test Department, Hector Zazou) and Chris Whittingham. As Ruby Throat, the duo released four albums and an EP between 2007 and 2017, as well as their 2018 compilations Stone Dress, and Liar, Flower. It began with Daisy Chainsaw in 1991 when KatieJane Garside emerged as a furious icon of the alt-girl underworld in a torn dress and matted hair howling ‘Love Your Money‘ a confused and violent mixture of lust and loathing, then came QueenAdreena bolder, darker, louder, unpredictable and violent. Courtney Love proclaimed her as one of the three instigators of the “Riot Grrrl” scene, along with Courtney (of course) and Babes in Toyland‘s Kat Bjelland, Katie has since gone on to inspire and enthuse a new generation of artists including Arrow De Wilde of Starcrawler, all while keeping her mysterious and creative integrity intact, a true artist in every sense.