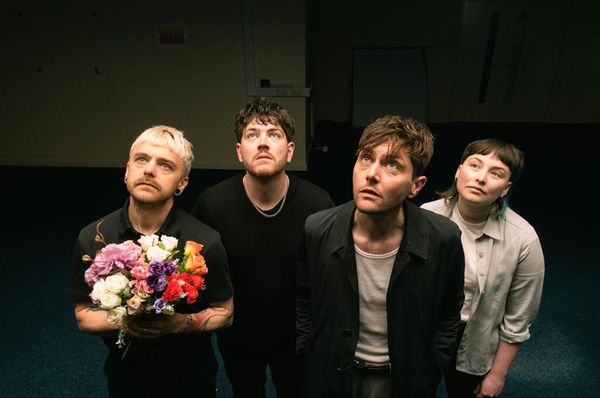 Watch video for “The Drug”

Following the recent announcement of their highly anticipated third album –‘North East Coastal Town’ – LIFE return today with “The Drug”, the third single to be unveiled, which sees the band lean further still into the more intricate textures and subtle idiosyncrasies that they explore on the new record. With punchy, biting vocals and angular, dynamic guitar work, the track carries the band’s much-loved trademark hook-heavy sound.

The accompanying video (directed by long-term collaborator Luke Hallett & drummer Stewart Baxter) features various artists and friends from the creative community within Shirethorn House; a commune of artists who have taken residency in the derelict building in Hull’s city centre.

Speaking on the new single vocalist Mez Green says: “The Drug is a love song. I wrote the lyrics in the cold mountains of Italy before taking them into the room with the band. ”The Drug I needed has always been here, the drug I needed has always been near” is, for me, realising that loved ones and those that love you, no matter where you are, can always be present. I’d never really believed this before and whilst this purity is at the lyrical heart of the song musically the band decided to inject flecks of dance, pop, harmonics, and dirty pulses to give the song drive, repetition and jerk-ability.”

“The Drug” is the follow-up single to “Big Moon Lake”, which was announced alongside the details of the new album and is currently playlisted at BBC 6 Music as well as various European radio stations. The band also shared an album track at the tail end of last year called “Friends Without Names” which also amassed popular support across BBC 6 Music resulting in an A-List addition.

The band will be performing a run of instore dates the week of release followed by a local celebration in Hull on Sat 3 September at The Social. Summer festival dates include recently announced dates at BST Hyde Park supporting Pearl Jam, Sea Power’s Krankenhaus festival in the Lakes, and Mad Cool Sunset Festival in Madrid. UK & EU album tours will follow in the Autumn – full listings below.

LIFE are a band anchored by the city of Hull – it’s geography, history and community has always inspired their creativity and with this new record they pay homage to their beloved city and it’s folk.

“Hull and the surrounding area runs through our DNA and has shaped us, weathered us, empowered us, embraced us and made us feel accepted.

North East Coastal Town is our love letter to the city. The album is an ode to kinship and relationship with its musical and lyrical spine picking out themes of love, desire, beauty, horror, chaos, pride and most importantly the sense of belonging.

It’s a reflective body of work dedicated to people and place and those that have always been there and made us feel like we belong.

Upon writing and recording this album it was important to us that this sense of belonging was also reflected in the album’s craft and therefore we used locally based studios, equipment, gear, and the community around us to establish what it means to belong in a North East Coastal Town.”