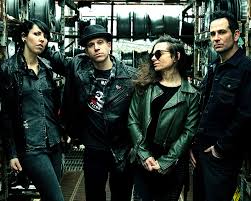 Hard rock and crossover metal veterans LIFE OF AGONY are putting the finishing touches on their hard-hitting, emotional concept album “The Sound of Scars“, due out this Fall on Napalm Records! Produced by Sylvia Massy (Tool, System of a Down), whose work has received multiple Grammy Awards and nominations, along wih LOA’s Joey Z (with mixing duties helmed by Massy), have tapped esteemed engineer Howie Weinberg (Nirvana, Soundgarden) to master the record. “The Sound of Scars” continues the haunting narrative from the band’s groundbreaking 1993 debut “River Runs Red“, which Rolling Stone hailed as “One of the greatest metal albums of all time.“

In support of their forthcoming studio album “The Sound of Scars“, LIFE OF AGONY have just announced that they will kick off the S.O.S. WORLD TOUR beginning in the UK this October, with very special guests DOYLE!

“There is something incredible happening around this ‘Sound Of Scars’ record and we can absolutely all feel it.“ bassist Alan Robert comments. “To get out there and start playing these new songs for everyone is gonna be a blast… and to do it with our dear friend and musical hero, Doyle of the Misfits fame, is definitely going to be a tour to remember. We’re already plotting some cool collaborations on stage! I’m packing my many, many Misfits shirts! (laughs)”

Make sure to catch LIFE OF AGONY at the following dates this Fall, with many more S.O.S. shows all over the globe to be unleashed soon:

Tickets go on sale Friday, May 24th, so better watch out for links and more exciting news to be issued in the days ahead!