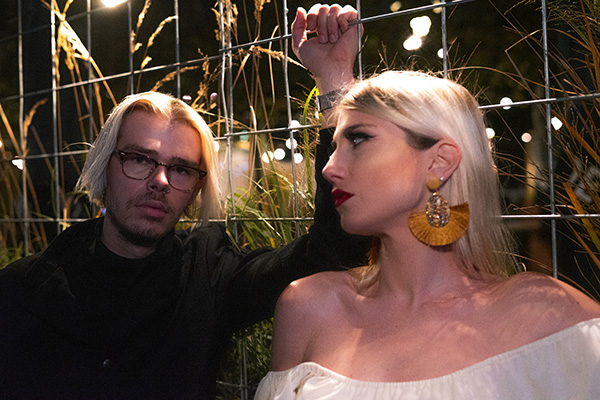 LIGHT BY THE SEA – debut album due October

After teasing their listeners with three singles and music videos, Light By The Sea can finally reveal the debut album title and release date by now.

The record is entitled Only Death Makes Icons, which drops October 22 worldwide.

“Writing this album together was the greatest musical adventure we could ever experience. Stuck in our apartment during lockdown, we were surrounding ourselves with great icons in thought, who inspired our music and lyrics.

We have been being nostalgic about the past, as the pandemic evoked a sort of obsession about the ‘good old times’ within us. We think with a lot of people this has happened lately.

Therefore we want you to dive into the forgotten sound with us and enjoy this musical ride together praising our eternal heroes. ‘Cause remember: only death can make icons, humans just play God. “

The album will be available on CD and on Vinyl. Pre-order link will follow.

A TRANSITION IN TIME // NEW VIDEO
An atmospheric teaser video has been added to these news, in which you can already listen to the first track of the album called A Transition In Time.

Light By The Sea on Spotify

Light By The Sea – a musical journey which wasn’t planned, but meant to be. Born during the quarantine times, this project is the lovechild of Eszter Anna Baumann and Davy Knobel, whose music consists of rock, avant garde and folk music elements with a catchy pop vibe. They recorded their first album with their producer Eddy Bopp this winter, set to be released October 22, 2021.

Getting inspirations from their musical role models — Dead Can Dance, U2, The Brian Jonestown Massacre, Phil Collins, Clannad, Fleetwood Mac and The Dandy Warhols —, they map a unique sound of self-discovery and self-realization in their artistic realm, in which a lot of listeners will feel comfortable with as Light By The Sea’s aim is to bring back the ‘forgotten sound’ with their music.

Artist: Light By The Sea
Location: The Netherlands
Genre: Rock

This is something completely different and something they are meant to be: Light By The Sea is the vision of a big production and the band is ready to take over the continent’s coolest club and festival stages. Anna and Davy have already announced some of the upcoming shows, so make sure to follow them on their socials.

LIGHT BY THE SEA is: