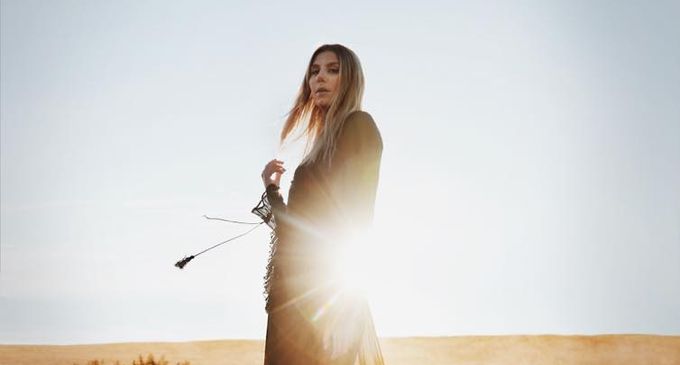 Louise Lemón established herself as ‘the queen of Death Gospel‘ with her latest psych-rock inspired pop album.

Following on from her critically praised debut album Purge, Louise Lemón returns with new album A Broken Heart is an Open Heart. There’s no rest for the wicked with the artist having just finished a European tour with Sólstafir, several performances as Eurosonic with more live dates lined up this Spring in the run up to Roadburn Festival.

Experimenting with instrumentation and production since her last full-length, Lemón’s new album sees her taking cues from the 60s and 70s psych-rock and soul era, channeling the sultry sensibilities of early Fleetwood Mac.

This really shines through on tracks such as ‘Almond Milk‘ “I was listening a lot to records like Rumours by Fleetwood Mac and L.A. Woman by The Doors which really had me inspired to make something that’s polished yet rough. It’s a liberating song to sing, a contradiction to the lyrics about holding on to something for dear life.“

Tracks such as ‘Montaña‘ build beautifully, with sparse piano chords giving way to luscious vocal melodies, with synth overtones that crescendo to a delicate yet powerful climax. Lemón tells us “this song is about not being able to let go and fall down when you find yourself in a dark moment. I wrote this when I lived in Spain and this feeling is just like an attempt to climb your highest inner mountain.“

While tackling dark subjects, there is an overall sense of uplift and reconciliation. For example, “Cross talks about acceptance and growing. Burying old thoughts of who you are and can be and instead dating to open up and really listen to the most inner thoughts, not judging instead trying to learn from it and rather than running from something owning it.“

Produced and mixed alongside regular collaborator Randall Dunn (Chelsea Wolfe / Thurston Moore / Algiers) in Copenhagen and New York, the album pays homage to the golden age of recording using only vintage microphones and amplifiers, with each track recorded live to capture the feeling in the room.

Speaking about the album as a whole, Louise added, “I wanted to make it this album both darker and brighter. We’ve used far cleaner sounds than ever before, concentrating on creating darkness in new ways. The songwriting has been very focused. I’ve evolved as a woman and with my writing I’ve explored new feelings, going further and deeper in to the ways I’ve felt and the situations life’s brought me to. It was such a blessing to be able to work with my band so closely, they are very much a part of the soundscape and we couldn’t be happier to have had Randall Dunn produce it.“

“Louise Lemón is an artist with the same crossover-potential as Anna von Hausswolff, Chelsea Wolfe and Lisa Culbert. It’s only a matter of time before Pitchfork and Stereogum will be hugging her to pieces, all while her music is harsh and dark enough to fit in Close-Up” // Jonn Palmér Jeppsson, Close-Up [SE]

“And suddenly the Swede sounds as if Chelsea Wolfe is blinking in the sun.“
// Thomas Pilgrim, Sonic Seducer [DE]

“Her music is soulful, atmospheric and occasionally claustrophobic
with more reverb than a Fields Of The Nephilim gig.“
// Natasha Scharf, Metal Hammer [UK]