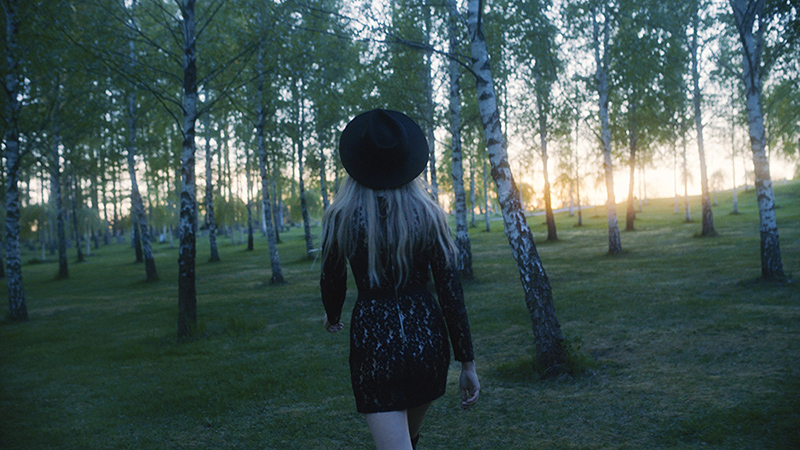 Louise Lemón bares her soul in the raw and
breathtakingly honest new EP ‘Devil’.
Louise Lemón is back with her new EP ‘Devil‘, baring her soul and embracing a more intimate and raw sound. The new EP is co-produced and mixed by Anders Ludwigsson,  (who is also the keyboardist in Louise’s backing band). While recording her last album Louise embraced a desire to work with more organic and raw elements.

‘I couldn’t be more satisfied with the way we did the last album’Louise comments, ‘It was a very positive experience’. But with a desire to always be able to embrace and explore new directions, new feelings, the Death Gospel Queen wanted to really dig into qualities that were touched upon on her previous record. With ‘Devil‘ she’s been able to look inwards, to capture the essence of self as she walked down many paths towards her ultimate goal. Spurred on by her previous work with producer Randall Dunn (Sunn O))), Chelsea Wolfe, Earth, etc.) and to make the process truly raw and organic, ‘Devil‘ was recorded at the band’s own rehearsal space, away from all distractions.

“Making this EP I wanted to do it in an honest way and really make it a natural process. After making my last record, which was very ‘produced’, I wanted to head to the studio and record it straight as it sounds. I wanted to capture the live sound and I wanted to get the grittiness on tape. It is really interesting, when creating you ignite your brain. So, when recording my last album, I already started to make the EP. Like a closure and beginning at once.”

Louise Lemón has made an extensive and spiritual journey with this EP; explored subjects such as loneliness, self-doubt and hot searing love. Within the open and honest lyrics we can listen to her contemplating herself, be reconciled with her own stubbornness, as well as her open heart, which has caused her pain through countless self-sacrifices. The new songs and their epic sound landscapes questions old truths and carry insights of battles lost, that in hindsight has also led to unlikely victories.

“Always listen to that gut instinct. You can’t expect love from someone who can’t love themselves. I just wanted to grind it out with my band. I’m always looking for this one sound, It’s like anxiety and freedom in one kind of sound. I’ve been talking to them about this sound since I started playing with them and in the guitar solo on this title track we found it, ten years in the making.”

Supporting ‘A Broken Heart Is An Open Heart‘ Louise headed out on a European tour with Sólstafir (IS), several performances at Eurosonic ESNS (NL), a celebrated performance at Roadburn Festival (NL) and a Scandinavian tour crowned with a successful performance at the popular Liseberg stage in Gothenburg late July. In the beginning of 2020 Louise just did her first headline tour in Spain which included TV and radio performances in Barcelona and Madrid and were just getting ready to start her  ‘Devil tour’ which would have started in Germany end of May but after recently announced Corvid 19 regulations, this will be postponed to a later date.

Embraced by the rock and metal world, Louise found herself the subject of numerous reviews and features across the world’s press; including major pieces in multiple country editions of Metal Hammer (including an invitation to their prestigious ‘Golden Gods’ awards), Powerplay, Revolver Magazine, Zero Tolerance, Close Up, Sonic Seducer, Orkus, Gaffa and many more…

The new EP ‘Devil‘ is out now on vinyl 12″ and digitally on the Swedish label Icons Creating Evil Art.