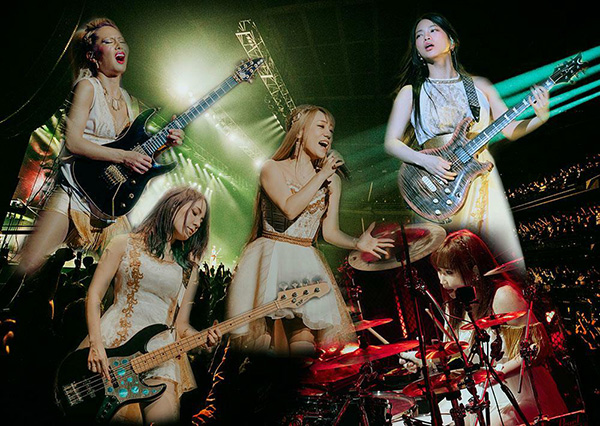 Japanese metal band LOVEBITES celebrate the glory of live music with their most heavy metal live experience so far.

Entitled HEAVY METAL NEVER DIES, LOVEBITES captures the essence of what it means to put on a metal show with this 2CD live album and video on demand release from 5 November 2020.

Recorded at TOKYO DOME CITY HALL within the limits of Japan’s coronavirus restrictions, where venue capacity was limited and fans were not allowed to cheer, LOVEBITES set out to show that even with such limits, HEAVY METAL NEVER DIES!

There will also be a bundle with a t-shirt featuring the cover art, as well as another bundle with these as we as the video on the demand performance and a tour pass.

Drummer Haruna comments, “We needed to have an even more ‘heavy metal’ show than usual. From huge stage sets to bold opening images to, special effects such as pillars of fire and snow. We aimed to deliver a theatrical and dynamic ‘heavy metal show’.”

HEAVY METAL NEVER DIES boasts a total of 19 tracks, including seven songs performed live for the very first time. Among these are ‘SET THE WORLD ON FIRE’ accompanied by pillars of fire, ‘A FROZEN SERENADE’ performed while snow falls, and ‘SPELLBOUND’ featuring Miyako playing keytar for the first time, as well as other exciting stage productions.

“During the pandemic we couldn’t hold a performance without following various rules and restrictions to control the spread of the virus. Although we can still perform, it’s very difficult in terms of performance implementation, especially for music such a heavy metal. That’s precisely why we gave it this name.

As LOVEBITES we can play metal and give fans hope. We wanted to convey the idea that ‘we will not let metal die’ with this tour.”

“Despite being able to perform at half of the planned capacity, now even those who couldn’t make it inside of the venue can experience our live performance. I hope you can feel the excitement and power of that day through this release.”

Disc One
1. Ride For Vengeance (Intro)
2. When Destinies Align
3. The Crusade
4. Golden Destination
5. Set The World On Fire
6. Shadowmaker
7. Today Is The Day
8. Winds Of Transylvania
9. Spellbound
10. The Unbroken