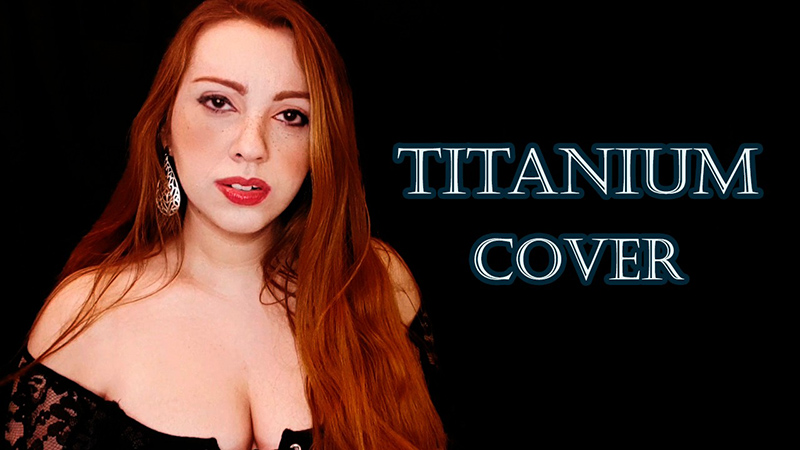 From house music to acoustic. Lyria‘s lead singer, Aline Happ, launches on her YouTube channel a version of David Guetta‘s song “Titanium“. The song was already presented by Lyria in some shows, some years ago, and today it gains an introspective cover, accompanied by the guitar of Rod Wolf, Lyria’s guitarist. The version also marks Aline‘s debut as a music producer.

“In the beginning, this version would be just voice and guitar. But I thought she was asking for something more, so I decided to venture into the world of production this time. Even a mini orchestra has some electronic influences. I had never done anything like this, but I was very happy with the result“, rejoices Aline Happ.

The song was originally released in 2011 by David Guetta with singer Sia. The emotional ballad achieved success in several countries. The lyrics talk about expressing personal inner strength, keeping your head up no matter how much everything seems to hurt. “I really like the melody and lyrics for that song. It matches what I think when I write, it brings an idea of strength and overcoming“, explains Aline.

This is not the first time that Aline Happ has crossed the metal line and met other musical styles. Previously, on Lyria’s channel, the singer has performed songs like “Let it Go” (Frozen); “Only Hope” (Switchfoot, popular in the voice of Mandy Moore); and “Red is the Rose” (Irish folk song).

“Some metal bands have a pop footprint today and I also see many versions of pop songs in rock and metal styles out there. We even took songs from Disney ourselves and created heavy versions. At shows, these versions are always successful“, highlights Aline.

Known worldwide, Lyria is a brazilian band founded in 2012 by Aline Happ. Since then, the group has released two albums with crowdfunding support, Catharsis (2014) and Immersion (2018) and played in several Brazilian cities. At the debut of Aline Happ’s channel, the singer presented an acoustic version of the song “Stricken”, by Disturbed, in the company of Lyria guitarist Rod Wolf. The channel also addresses issues about makeup, food, exercise, among other topics.