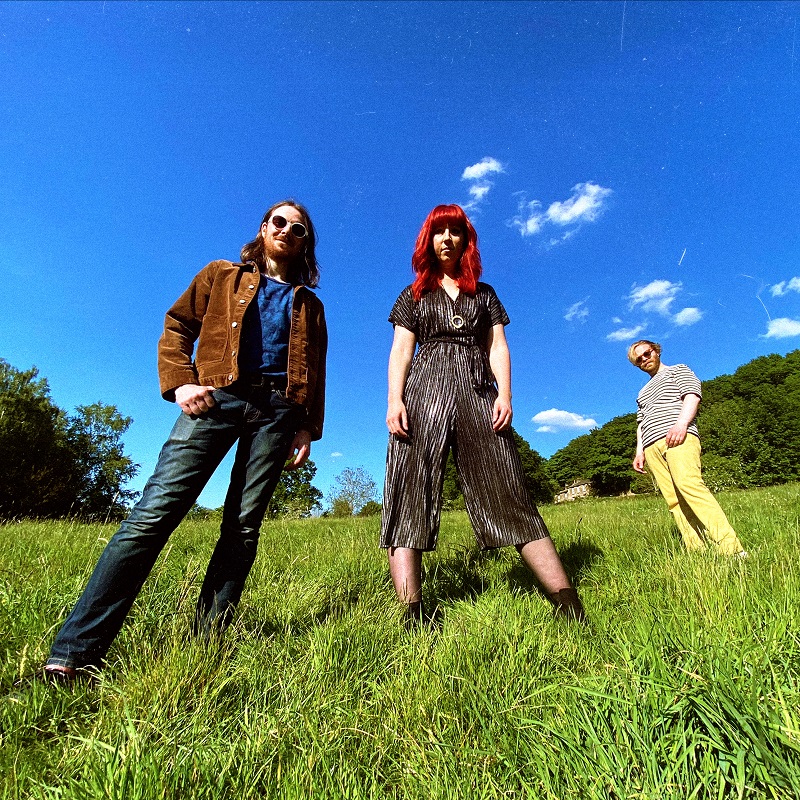 With tales of infinite space, otherworldly escapes, hazy dreams and Weird Feelings that weave together the supernatural and the visceral; Magick Mountain are a power trio with colossal riffs, entwining harmonies and fistfuls of wild, distorted energy. They are quickly carving out a place for themselves at the vanguard of an exciting new movement of high octane garage-rock bands, and now they prepare for their first full length release.

Single “King Cobra“ sets the tone for the album, with chunky, lolloping riffs and a hyperspeed half-way guitar solo breakdown, spiraling around mantra-esque chants that conjure the loaded mythological connotations of the viper. It’s an energetic blast of catharsis, channeling feelings of fear, anxiety and battling inner demons.

Magick Mountain is what happens when the planets align and sees seasoned session musician Lins Wilson assume her rightful place; leading this fuzzed out, psychedelic, proto-punk power trio, flame red hair flowing and guitar wailing. Having written and performed with many legendary Leeds bands (including Grammatics & Mother Vulpine), Lins is now flanked by like-minded northern noiseniks Tom Hudson (Pulled Apart By Horses) and Nestor Matthews (Sky Larkin, Menace Beach). They have all toured globally under their various guises, so although Magick Mountain is a new beast, it has expert players at the helm.

Taking its title from the album’s very opening utterances, ‘Weird Feelings’ surges forth, brimming with tales of fantastical worlds, ancient mythology and mystical metaphors. Yet for all its surrealist imagery and dramatic sonic escapades, at its heart ‘Weird Feelings’ is an album about real life and the truth of its creators. The vivid stories and symbolic references create parallel meanings, blurring real feelings and fantasy worlds.In the band’s own words, the album is “a kind of bastardisation of tales and beliefs, blending together past, present and future.”

Amidst minimal lyrics that are often mantra-like and hypnotic in their repetition, Magick Mountain document the passing of time, both scientifically and philosophically, and simultaneously battle demons of both the mental and mystical kind.

Recorded in an unhurried and reflective way over the course of 18 months, the album is comprised of instinctive moments captured at home, in rehearsals, and limited hours in recording studios with producers Margo Broom and James Kenosha. The rushes are kept raw and free-flowing, with the band making a conscious decision to resist the temptation to overproduce. The resulting recordings see the easy-going, natural creative chemistry between the three musicians reverberate gloriously through every kinetically-fueled note. They carry the listener with them on heady adventures of melodic fuzz building to breakneck speed solos that feel as though they could fall apart at any second, but never do. Throughout the exhilarating twists and turns, Lins and Tom’s dual vocal strike forges the way, with their voices often blending to become one. Lins takes the mid-register and Tom sings the higher, falsetto parts – a technique that nods to some of the garage-rock greats who have influenced their sound, but also gives Hudson’s vocals a distinctly different edge to his previous musical outings.

Magick Mountain having already graced the likes of Radio 1, BBC6 Music, Latitude Festival and Live at Leeds with their presence. Now, they prepare to invite the rest of the world into their kaleidoscopic realm of infinite space, otherworldly creations and supernatural power. Be worthy, be brave and they will welcome you gladly into their cacophonous embrace.